Pirelli’s GP2 and GP3 drivers use tyre strategy in Hungary

GP2 and GP3 review: Hungarian Grand Prix, 26-28 July In some of the hottest conditions seen so far this year, the GP2 and GP3 drivers were able to use tyre strategy to their advantage on the tight and twisty Hungaroring. For GP2, the P Zero White medium and P Zero Yellow soft tyres were used (the same nominations made for Formula One). For GP3, just one compound is selected per race weekend: in Hungary it was the medium compound. All the GP3 compounds carry the same yellow markings however. With high temperatures and a challenging track layout that puts the emphasis on traction and braking, Hungary can be extremely demanding on tyres. Consequently, looking after the rubber by knowing when to push and when not to push was an essential skill in both categories. In GP2, there is a compulsory pit stop in the feature race, but unlike Formula One the drivers do not have to use both compounds. This fact was key to Carlin driver Jolyon Palmer’s victory in the feature race on Saturday. Having qualified seventh on the soft tyres, the Englishman used the medium compound twice in the 37-lap race, changing all four tyres with 19 laps to go. His strategy led to an intense battle with Dams driver Marcus Ericsson throughout the race, which Palmer described as one of the best of his career. Ericsson adopted a different strategy, starting the race on the soft tyre before moving onto the medium on lap seven. Palmer’s longer first stint meant that he gained track position: crucial at the Hungaroring, where overtaking is extremely tricky, and was then able to take advantage of fresher tyres at the end of the race when Ericsson challenged him for victory. 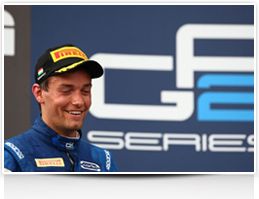 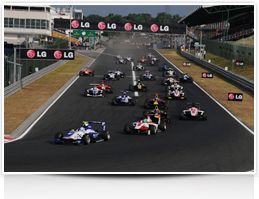 Palmer – the only driver in the top eight to start on the medium tyres, and the only driver of them all to start on used mediums – said: “To be honest, I was going to go for the soft, and it was a late call on the grid because we saw that everyone ahead was on soft tyres. We thought we should go on medium and see what happens. I got a very good start up to third and from there we thought we could go out for a win today. My pace was very good for the first stint so when the guys ahead pitted, I was able to put in some very good laps and jump them. And then I came out of the pits side by side with Marcus. And then because we were back on the medium tyres, we had an advantage to the end and it was just a matter of time to pass him. There was very little degradation especially on the first 20 laps. The mediums were consistent all the way through.” In the sprint race on Sunday, with no compulsory pit stops, Trident driver Nathanael Berton won his first ever GP2 encounter, using the medium tyres from start to finish, which showed no sign of dropping off over the 28 laps. Despite scoring no points this weekend, Rapax driver Stefano Coletti maintains the championship lead. In GP3, a brand new 400-horsepower car means that the Pirelli P Zero range has been heavily revised for this season. With no pit stops allowed, the medium tyres were chosen for the wide-ranging demands of Hungary. The main factor governing wear and degradation was the high ambient temperatures, which meant that drivers had to manage the rubber very carefully. Finnish driver Aaro Vainio (Korainen) became the first GP3 driver to win more than one race this year, having held off ART driver Conor Daly from pole position. The race was interrupted by a safety car period that turned the final four laps into a sprint, and while Daly (who had qualified second) threatened to challenge for the lead, Vainio used his tyres perfectly to convert his pole into a win. As is the case for GP2, the grid for the sprint race in GP3 consisted of the top eight feature race finishers reversed. The race was another pole to chequered flag win, this time for Arden’s Robert Visoiu, with his team mate Carlos Sainz Junior in second. Once more, the medium tyres held up perfectly over the 17 laps in rising temperatures. The Romanian commented: “At the end of the race I was struggling a bit, but not as much as the others. I was two seconds quicker than anybody else. We know we have the pace; we just need to focus more in the qualifying. If we can improve that we can continue results like this.” Heading into the mid-season break, Manor driver Tio Ellinas continues to lead the championship by just one point from ART’s Facu Regalia. Pirelli’s racing manager Mario Isola said: “The extremely high ambient and track temperatures at the Hungaroring added an extra dimension to the challenge faced by the drivers when it came to managing their tyres. Although levels of wear and degradation were not generally high for the medium compound, the constant direction changes meant that the tyres were asked to do a lot of work, so as usual a neat and efficient driving style proved to be the best way to look after the rubber. Jolyon Palmer took a gamble with tyre strategy in the GP2 feature race and this worked perfectly for him: a classic example of how the right tyre strategy can win the race in combination with a fast driver. Despite the very high temperatures, the tyres stood up extremely well to the conditions, both in terms of durability and performance. In terms of understanding how the tyres work in extreme conditions and seeing what it possible with strategy, we think that this has been a very educational weekend for everybody. We’re sure that this will be very useful for the second half of the season, which looks set to be extremely closely contested.” This year’s GP2 season takes in 11 rounds and 22 races, with GP3 taking in eight rounds and 16 races. The next round of the GP2 and GP3 Series takes place at Spa-Francorchamps for the Belgian Grand Prix from 23-25 August, after a month’s break over the summer.