Formula One hopefuls from the GP2 and GP3 Series will sample Pirelli’s P Zero soft compound tyres in competition for the first time when the two championships support the European Grand Prix at Valencia in Spain from 24-26 June. 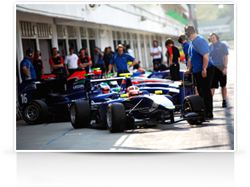 The Italian company’s racing manager, Mario Isola, explained: “We will equip both GP2 and GP3 drivers with our P Zero soft compound tyres in Valencia in order to ensure performance and durability on this technical street circuit, in track conditions that are likely to be hot. Due to its smooth-road asphalt, a tyre with a high level of grip is needed and our P Zero soft compound is the best option to be raced on medium-low speed tracks that require good grip, like Valencia. As in Monaco, where we supplied the GP2 drivers our supersoft option, drivers will have few chances to overtake. However, unlike Monaco the Valencia circuit is 14 metres wide in most places with spacious run-off areas.” The Valencia races will mark the first time that GP2 drivers will have the chance to try out Pirelli’s soft compound tyres. The other three compounds in the GP2 P Zero range have already been used on track this year either during pre-season tests or race weekends. Pirelli’s medium slicks equipped the 2011 GP2 Asia Series and were used during pre-season GP2 tests at Silverstone and the main series’ opening round in Istanbul. Pirelli’s hard slicks were supplied for Barcelona during pre-season tests and the GP2 races. The supersoft compound made its first and only appearance during Monaco’s race weekend. GP2 driver Josef Král (Arden International) commented: “In Valencia I’ll try Pirelli’s soft tyres for the first time and I really hope to enjoy the same good performance I had running on the P Zero supersoft tyres in Monaco. Personally, I don’t think it will be difficult to adapt quickly to the new rubber because in Monaco I had to use tyres, which had never been seen on the track before. As I had no problems adapting to Pirelli’s supersoft tyres, I’m sure that it will be the same with the soft slicks in Valencia.” GP3 drivers have had the opportunity to sample Pirelli’s soft compound tyres during pre-season tests at the Paul Ricard circuit in the south of France in March and during mid-season tests at the Hungaroring and the Valencia permanent circuit earlier this month. At Paul Ricard, GP3 drivers did not have many opportunities to run on their soft slicks because of the adverse weather conditions, which forced them to mostly use the P Zero wet tyres. As dry and warm weather conditions were the backdrop to the GP3 tests in June, the drivers managed to get a good understanding of the softest of their three types of dry tyre. Throughout both sessions, the soft tyres proved to be a consistent product showing good levels of performance and appropriate levels of degradation. GP3 driver Lewis Williamson (MW Arden) said: “In Hungary the soft tyre seemed to work well straight from the off out of the garage. You could really feel the tyre giving you the right grip especially during the very first laps. In Valencia it has been a bit more complicated to get the best out of these tyres because of the different track and weather conditions. I’m quite confident for this round, though the feeling you get from your tyres during testing is quite different from competing on a track during a race weekend when a lot of rubber has been put down.” On Friday 24 June, the GP3 drivers will take part in two practice sessions while the GP2 drivers will complete a single practice and qualifying session. On Saturday 25 June, GP3 drivers will complete their qualifying session in the morning, followed by the GP2 feature race at 13:40 and the first GP3 race at 17:20 local time. Before the European Grand Prix gets underway on Sunday 26 June, the GP2 sprint race will take place at 08:25, followed by the GP3 second race at 09:25. The GP2 drivers will cover 32 laps in Saturday’s race and 23 laps in Sunday’s race, while both GP3 races will last for 14 laps of Valencia’s 5.419-kilometre street circuit. For further information please contact: Laura Bartoli on +44 7500 877304 or laura@mediatica.co.uk