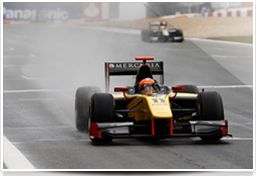 Just like Silverstone, the P Zero GP2 and GP3 slicks and wets were a highlight of the action at the Nurburgring track. Pirelli equipped Formula One’s feeder series with soft compound tyres, in cold weather and mixed track conditions during the German Grand Prix weekend. The P Zero GP2 and GP3 soft slicks were chosen as they provide good roadholding, with a rapid warm-up time even on a cold track. Over the weekend, they proved to be well-suited for this technical circuit, performing very well in extremely changeable track conditions. The rain tyres were also used in Germany,equipping GP2 and GP3 drivers in damp to wet conditions. Pirelli’s Racing Manager Mario Isola commented: “Our P Zero GP2 and GP3 soft tyres helped the drivers to cope well with the low track temperatures, easily warming up on a cold track and providing good grip after a few laps. Because of the unpredictable weather conditions, the drivers had a tough time managing their slicks when the rain hit the track and they also struggled a bit to cool down their wet tyres when the surface started drying up. Our wet tyres again showed their strength during Sunday’s GP2 and GP3 races.” The weather was the main challenge of the Nurburgring round with the sky often threatening rain throughout Friday and Saturday and eventually forming the backdrop to Sunday’s action. Pirelli’s GP2 and GP3 P Zero soft slicks were used during practice and qualifying sessions, enjoying a good performance under cold weather conditions and running on a dry track. Saturday’s action got underway in dry conditions with the GP2 drivers completing their feature race on slicks and Luca Filippi (Scuderia Coloni) taking his first win of the season. Then it was the GP3 first race, which started in dry conditions and then got progressively wetter. Most of the drivers stayed on slicks with the top three making some great moves in their final fight for the podium. GP3 race one winner Rio Haryanto (Marussia Manor Racing) commented: “I started Saturday’s race on slicks and took the risk of keeping them until the end. When it started raining, the track conditions changed completely, becoming extremely slippery. It wasn’t easy to run on slick tyres but it was fun to defend and fight for the podium.” Sunday’s races were held in wet to damp conditions, using Pirelli’s GP2 and GP3 wet tyres. The P Zero GP2 soft tyres were only seen in the final part of the sprint race with the drivers desperately trying to stick to the dry line as it started drizzling again. GP2 sprint race winner Romain Grosjean (DAMS) commented: “It was hard to find great performance from the tyres in these difficult conditions. Nevertheless, when the track was dry the soft slicks warmed up quite easily and degradation was very low. On Sunday the situation was completely different. Along with the rest of the field, I started on wets and managed to jump from P6 to P2. With 20 minutes left, the track started drying up so I switched to slicks. It was still slippery so I tried to stick to the drying line and eventually got the win from Jules [Bianchi] over the final lap.” Mario Isola added: “Throughout the weekend, the drivers managed their soft slicks well, managing to avoid ruining them by pushing hard before they had warmed up properly. On Saturday, the GP2 drivers pitted early in order to have good grip in the final laps, which resulted in a thrilling second part of the race when the strategy started to play out. The GP3 drivers did a great job running on slicks in very difficult conditions during race one. On Sunday we equipped GP2 and GP3 drivers with our wet tyres, which helped to encourage some great moves and overtaking even in the wet conditions.” Romain Grosjean (DAMS) extends his lead in the GP2 standings to 59 points, followed by Giedo van der Garde and Charles Pic with their team Barwa Addax Team is still on top of the GP2 teams’ standings with 75. Alexander Sims (Status Grand Prix) is now leading the GP3 series by six points ahead of the MW Arden duo of Lewis Williamson and Mitch Evans. MW Arden is leading the GP3 teams’ standings by five points ahead of Lotus ART. Pirelli’s P Zero GP2 and GP3 soft compound tyres will be next seen at the Hungaroring circuit near Budapest, where they will equip Formula One’s feeder series from 29 to 31 July in weather conditions that are likely to be a lot warmer.
Newsroom