The third round of the 2011 GP2 Series got underway in the principality over the weekend, with Pirelli's supersoft compound tyres enjoying a successful debut, during the Monaco Grand Prix weekend. Pirelli decided to equip the GP2 drivers with its softest compound because of the specific layout of this unique street circuit, which is tight and twisty. The lap is typified by low speed and grip levels combined with a smooth and slippery surface. 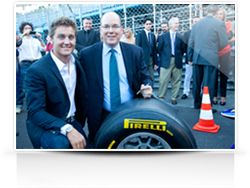 Though the sizes are the same, the compound and structure of Pirelli's GP2 supersoft tyres are different to the P Zero Red Supersoft tyres used in Formula One and this mainly because the series regulations do not permit tyre blankets, unlike Formula One. For this reason, Pirelli has developed for the GP2 Series a very specific tyre compound that is able to rapidly reach its ideal operating temperature. Pirelli's racing manager Mario Isola commented: "We are very satisfied with the performance of our P Zero supersoft rubber, which has proved to be a very consistent tyre that contributed to some great on-track action in Monaco. Before coming here, the GP2 drivers did not have a chance to try out our very softest compound: not even during the pre-season tests. In spite of this, they adapted themselves very quickly to this new challenge while both the performance and durability of this tyre was exactly in line with what we expected." P Zero tyres enjoyed a special welcome in the principality on Friday evening with Prince Albert of Monaco honouring Pirelli by autographing a GP2 show tyre, which was also signed by local hero Stefano Coletti (Trident Racing). This unique Pirelli tyre will then be donated to charity together with the Monegasque driver's race suit: a special one-off design for Monaco. 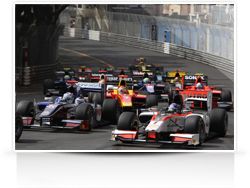 THURSDAY MAY 26, 2011 On Thursday morning, the GP2 drivers took to the track in hot and dry weather conditions following the first Formula One free practice session. The 30-minute session was busy, with several yellow flags and one red flag. Romain Grosjean (DAMS) took the lead and remained at the forefront for almost the entire session. The Frenchman kept improving his pace until he set a best lap of 1m22.368s, beating his pursuers Dani Clos (Racing Engineering) and Stefano Coletti (Trident Racing) by more than a second. Fourth-placed Luca Filippi (Super Nova Racing) commented: "I was very pleasantly surprised by the consistency of Pirelli's supersoft tyre. Personally, this is the compound I've liked best so far because it has high levels of performance and it is well balanced between the front and the rear. My pace was very competitive over the first few laps and then the grip started to slowly decrease; just as I expected from this supersoft tyre." After Formula One's afternoon practice session the GP2 drivers were back on track for qualifying. This proved to be an action-packed fight for pole position, featuring a number of yellow and red flags caused by several collisions, incidents and aggressive manoeuvres. Giedo Van der Garde (Barwa Addax Team) took advantage of his rivals' errors by claiming pole position with a best time of 1m21.781s set in the final minute of the session. Behind him were Sam Bird (iSport International) - who had topped the time sheets a couple of minutes before the Dutchman - and Jules Bianchi (Lotus ART) who had been fastest in the first part of the session. More surprises were come with the starting grid of Friday's race changing dramatically after the session: Sam Bird (iSport International) was promoted to his first pole position of the season as Van der Garde was among those who were handed penalties post-qualifying. Giedo Van der Garde (Barwa Addax Team) commented: "I enjoyed running on Pirelli's supersoft slicks: they made me feel confident and gave me good grip on this slippery road surface. I'm satisfied with the overall performance of the tyre: the handling worked well throughout qualifying and also the overall performance of the tyre was good." FRIDAY MAY 27, 2011 On Friday the circuit reopened during the morning, with clouds cooling down the heat that had formed the backdrop to Thursday's action. With no Formula One activity on the schedule, Pirelli's GP2 supersoft tyres took centre stage on track, forming one of the highlights of an incredible 40-lap race throughout the glamorous streets of Monaco. The action began with Sam Bird (iSport International) stalling on the start-finish line and Davide Valsecchi (Team AirAsia) immediately taking the lead. The Italian hung onto his advantage, sealing a historic win thanks to an excellent pit stop and race strategy, perfectly managing his tyres for over 60 minutes. Pirelli tyres were a highlight of the race with every lap turning into a fierce fight for the podium, especially right at the front. The rest of the field was caught up in traffic, accidents and collisions. There were also a number of yellow flags and three safety cars. A good pit stop strategy made the difference on this tight track where overtaking is hardly ever part of the script. During the main GP2 race in Monaco a number of different strategies were used with drivers pitting between laps seven and 23, mostly stopping only once to change their rear tyres. Race winner Davide Valsecchi (Team AirAsia) commented: "I'm very happy with today's result. Thanks to a great start, a smooth pit stop and a good race strategy I managed to stay in front and enjoy a spectacular race. I felt very confident running on Pirelli's supersoft tyres, which gave me good grip throughout the race. Initially I was wondering a bit about the durability of this tyre, but actually it proved to be very consistent, enabling me to push hard from start to finish. This time we found the right set-up which helped me to get the very best out of the new Pirelli rubber." SATURDAY MAY 28, 2011 After Formula One's third practice session and qualifying, the GP2 sprint race got underway on a well-rubbered track, with Pirelli's supersoft tyres enjoying an exciting 30-lap sprint race. The Monaco GP2 race weekend came to an end with polesitter Charles Pic (Barwa Addax Team) taking the chequered flag in first place, after enjoying a great race that featured a few accidents, two safety car periods and some exciting overtaking. Pirelli's racing manager Mario Isola commented: "As overtaking opportunities are quite limited in Monaco, races can turn out to be just a procession of cars sometimes. This time, there was plenty of action and Pirelli's GP2 tyres certainly stood up to the challenge, adding to the spectacle of this already unique racing experience. On Friday we saw a number of different pit stop strategies, which made the situation very interesting. It was great to see so many drivers throughout the weekend making the most of our supersoft compound." Former Pirelli test driver Romain Grosjean (DAMS) leads the championship together with Sam Bird (iSport International) after Monaco, with 23 well deserved points. Charles Pic (Barwa Addax Team) follows with 22 points while Davide Valsecchi (Team AirAsia) and Giedo Van der Garde (Barwa Addax Team) are next in the drivers' standings, both on 21 points. Pirelli will next equip Formula One's feeder series - GP2 and GP3 - in Valencia (Spain), running from 24-26 June, alongside the European Formula One Grand Prix. *** For further information, please contact: Laura Bartoli on laura@mediatica.co.uk or +44 7500 877 304