Newly-announced Formula One tyre supplier Pirelli, which will provide the world's premier single-seater series with tyres in a three-year deal from 2011 to 2013, heads to Silverstone this weekend for round four of the GP3 series with new hard-compound tyres. As well as supplying Formula One with tyres next year, Pirelli will also supply GP2 and continues to supply GP3: ensuring a ladder of talent that will enable youngsters to progress their careers all the way to the top, with the help of Pirelli. 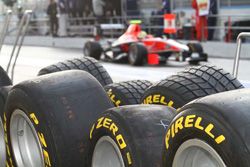 The first step of that ladder is the GP3 series: newly-created this year as a feeder formula to GP2, which is now recognised as the established route to Formula One. The 30 identical cars all use 280-horsepower Renault engines and the same tyres, putting the emphasis firmly on driving talent. Six closely-fought races at Grand Prix weekends in Barcelona, Istanbul and Valencia have proved that the concept works, allowing the most influential people in motorsport the opportunity to see up-and-coming talents compete against each other in a thrilling battle for supremacy. At Silverstone this weekend, the GP3 drivers will use the new hard-compound PZero 13-inch tyre for the first time. On the opening two rounds, the medium compound tyre was used, while the soft compound made its debut in Valencia. Nonetheless, conditions in Silverstone will be somewhat different to anywhere else. The British track, which is one of the oldest permanent circuits on the Grand Prix calendar, has just undergone extensive redevelopment with a new section added to the infield that increases the lap length to 5.9 kilometres. This means that the tyres will have to deal with new asphalt and a configuration that nobody is familiar with, while performing well at the sustained high speeds that Silverstone is famous for. The British weather, which is renowned the world over for its unpredictability, is also likely to be an important factor governing the use that the drivers make of their tyres. Pirelli's Racing Manager, Mario Isola, comments: "Working as always in close collaboration with the GP3 series organisers, we identified Silverstone as the right place for our hard-compound GP3 tyres to make their debut at the start of the year, and we are looking forward to seeing them out on the new Silverstone circuit. The demands placed on the tyres are very high there, but we are confident that we have a product that will cope very well with the challenge. Of course we are constantly evolving the tyre design, so if we see at the end of the weekend that there is not enough wear, we can certainly adjust the hard compound in future. But there are so many other factors at work at this very famous circuit that it is hard to predict exactly what is going to happen over what is sure to be another extremely exciting weekend!" After the opening six races of the season, Mexico's Esteban Gutierrez leads the GP3 series from Canadian Robert Wickens and America's Alex Rossi. ART Grand Prix leads the teams' championship ahead of Manor Racing. Practice in Great Britain takes place from 16:50 on Friday 9 July. Qualifying begins at 08:45 on Saturday morning, followed by race one at 16:20. Race two starts at 08:30 on Sunday, with both races lasting half an hour or 17 laps.