The second round of the 2011 GP2 Asia Series will take place from 17-19 February at the Sakhir Circuit in Bahrain, with Pirelli once more ready to equip drivers with its newly-developed 13-inch PZero control tyres. 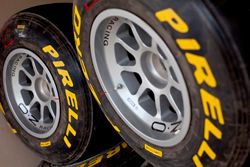 After a very successful start at Abu Dhabi's Yas Marina Circuit last week, Pirelli's PZero tyres are ready to star at the next races. The remaining two GP2 Asia rounds of the season will be held at Bahrain's Sakhir Circuit from 17-19 February and from 11-13 March. As in Abu Dhabi, PZero medium slicks will be used, powering a full grid of 26 GP2/11 cars. Since its opening in 2004, the Bahrain International Circuit has played a crucial role in helping to increase the popularity of single-seater championships in the Middle East. Aiming to become the 'home of motorsport in the Middle East', its 5.412 km-long track presents drivers with an exceptional challenge. Featuring 15 turns, four straights, a change in elevation of 18 metres and a variation in width from 14 to 22 metres, exciting overtaking opportunities and closely-fought races are always on the cards. Sakhir's track surface is very grippy and highly demanding in terms of tyre performance. With sun and sand always around, there are many factors that can affect the tyres during races. The arid climate that Bahrain enjoys all year round can also bring the track temperature up to significant levels, meaning that the drivers have to manage their tyres properly. Pirelli's Motorsport Director Paul Hembery explained: "When strong reliability and extreme grip are needed, the PZero medium slicks have always lived up to expectations. In Bahrain the rubber is likely to undergo a wide range of demands, including high track temperatures. Our GP2 medium slicks have great balance in terms of durability and performance, two factors that are vital when it comes to racing in Bahrain. We're really looking forward to the next two GP2 Asia races in Bahrain, where we aim to repeat the excellent performance shown by the PZero tyre in Abu Dhabi." Practice and qualifying in Bahrain will take place on Thursday 17 February, at 11:00 and 15:30 respectively (GMT+3Hrs). The Feature Race will be held on Saturday, 18 February at 14:00, followed by the Sprint Race on Saturday 19 February at 14:00 (GMT+3Hrs).