Pirelli’s GP2 medium and GP3 hard compound tyres along with the P Zero wets were seen on track at Silverstone over the weekend, equipping Formula One’s feeder series under extremely changeable weather conditions. For the Silverstone round, Pirelli took the challenge of nominating its P Zero medium tyres for GP2 and its P Zero hard tyres for GP3 in order to provide drivers with a resistant tyre compound capable of encouraging more overtaking and strategy thanks to its inbuilt characteristics. 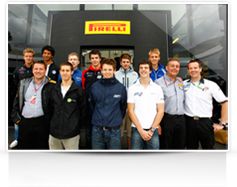 Adding to the challenge of this demanding track was the weather, which ranged from intermittent rain to bright sunshine throughout the weekend. Pirelli’s GP2 and GP3 wets dominated the show on Friday and Saturday afternoon, ensuring good levels of grip under difficult conditions. Because of Silverstone’s mixture of surfaces, when it stopped raining some sections were drying up faster than others, with the drivers needing to concentrate on preserving their wet tyres. Sunday’s races were by contrast held in dry conditions, with Pirelli’s GP2 and GP3 slicks performing faultlessly on a cool track of around 18 degrees centigrade. The P Zero tyres coped very well with the changeable ambient and track conditions and once again tyre management was a crucial element during the races. Pirelli’s Racing Manager Mario Isola commented: “Our GP2 and GP3 wet tyres were the unexpected highlight of this round, performing very well on a cool track ranging from full wet to damp conditions.  When the rain gave us a break, our GP2 medium and GP3 hard slicks were back on track. As intermittent rain was the backdrop to Saturday’s races, the tricky part for the teams was choosing when to go on slick tyres and push. Nonetheless, we saw some great moves in the wet and several wheel-to-wheel battles. On Sunday the deliberate degradation of the P Zero GP2 slick tyres helped Romain Grosjean to pull off some great overtaking moves and make up some places in what was a closely-fought battle for the win until the final lap.” GP2 feature race winner Jules Bianchi (Lotus ART) commented: “I enjoyed running on Pirelli’s P Zero wets during both qualifying and Saturday’s race, and it was also good when I switched to the medium compound. The overall performance of the wets was good, although I experienced a bit of degradation running on the parts of the track that were drying. Anyway I'm really happy, because after some difficult races it was good to be back on pole. During Sunday’s sprint race I managed the slick tyres very well and jumped from P8 to P5.” GP3 race one winner Nico Müller (Jenzer Motorsport) commented: “It was a tough weekend but I enjoyed racing in the rain. Pirelli’s wet tyres performed very well and I had no problems whatsoever. I was among those who started Saturday’s race on the wets, which was the right strategy. The team and I took the risk and I’m glad it worked out very well. I struggled a bit to cool them down on the straights but in the end it was fine.” After the Silverstone round, Romain Grosjean (DAMS) maintains the top place in the GP2 standings on 47 points, followed by Giedo van der Garde (Barwa Addax Team) and Sam Bird (iSport International) while Barwa Addax Team is still on top of the teams’ standings with 62. Alexander Sims (Status Grand Prix) takes the lead of the GP3 championship by three points while MW Arden keeps the top spot in the GP3 teams’ standings on 45 points. Pirelli’s P Zero GP2 and GP3 tyres will be next seen at the Nurburgring circuit in Germany, where they will equip Formula One’s feeder series with the soft compound specification, running from 22 to 24 July alongside the German Grand Prix. For further information please contact Laura Bartoli on +44 7500 877 304 or laura@mediatica.co.uk