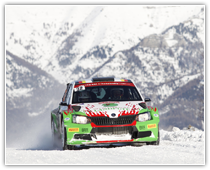 Monte Carlo is always unpredictable from the point of view of a tyre manufacturer, as the surface conditions and grip levels are constantly changing. With drivers only able to carry six wheels at one time they have to decide, several hours in advance, which allocation of soft, supersoft, and snow tyres they should take to cope with a wide range of conditions. Anyway, Pirelli-backed drivers have finished on the podium of the WRC2 and WRC3 classes of the Monte Carlo Rally: the opening round of the 2016 World Rally Championship. Former FIA European and Asia Pacific champion Armin Kremer drove a Pirelli-equipped Skoda Fabia R5 to finish third in the WRC2 category. In the two-wheel drive WRC3 class, Fabio Andolfi finished third in his Peugeot 208 R2. However, Pirelli’s WRC1 contenders suffered mixed fortunes on an event that is often compared to the roulette wheel in Monaco’s famous casino. Former grand prix star Robert Kubica – who has starred in Monte Carlo on Pirelli tyres previously – slid off the road on Friday morning’s SS4 at a place that caught out many other competitors. Lorenzo Bertelli was also caught out by the notoriously treacherous conditions, retiring his Ford Fiesta RS WRC following an off on SS6 on another patch of ice. The Pirelli drivers used the RKS soft and RKSS supersoft compounds, as well as Sottozero snow tyres for snowy conditions. The weather was generally dry throughout the event, although there were some isolated snowy and icy patches. Pirelli’s next World Rally Championship event will be Rally Sweden from February 12-14: the only full snow rally in the championship. Pirelli’s Sottozero Ice tyres will also be in action the weekend before in Latvia, at the opening round of the European Rally Championship.