Poker of Pirelli tyres in the motocross Internationals of Italy

Cairoli, Van Horebeek, Charlier and Ravera champions with Pirelli SCORPION™ MX The Internationals of Italy have closed down with the clear dominance of Pirelli SCORPION™ MX tyres that equipped the bikes of the four champions who won the 2014 titles. On the renewed Miravalle track, where Pirelli riders have chosen SCORPION™ MX MidSoft 32F front and rear, Antonio Cairoli is seen escaping the MX1 title because of injury to his left ankle bruised after making contact with an opponent at the first corner after the start. A positive situation for Belgian factory Yamaha Jeremy Van Horebeek, which was enough the second place to get the number one red plate. Taking the starting gate despite the sharp pain in the joint, Cairoli took his revenge in the Elite race where he finished fourth behind Van Horebeek becoming champion thanks to the discard admitted by the rule. All Pirelli podium in the MX2 class, with Arnaud Tonus winner after controlling without mistakes the race of Dylan Ferrandis and French factory Yamaha's Christophe Charlier who got the title, and in the 125 class where Lorenzo Ravera has dominated the championship after the points leader Thomas Isdraele leaving the scene since the first round due to a dislocated shoulder. 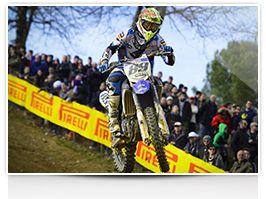 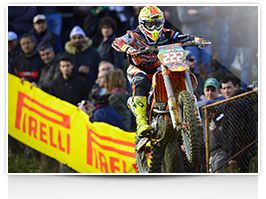 Samuele Bernardini was once again the protagonist of 300 class, which saw him beating Deny Philippaerts. Closed parenthesis of the Italian championship, motocross jump directly to the GP season which opens March 1st at Losail (Qatar).

Poker of Pirelli tyres in the motocross Internationals of Italy
Newsroom