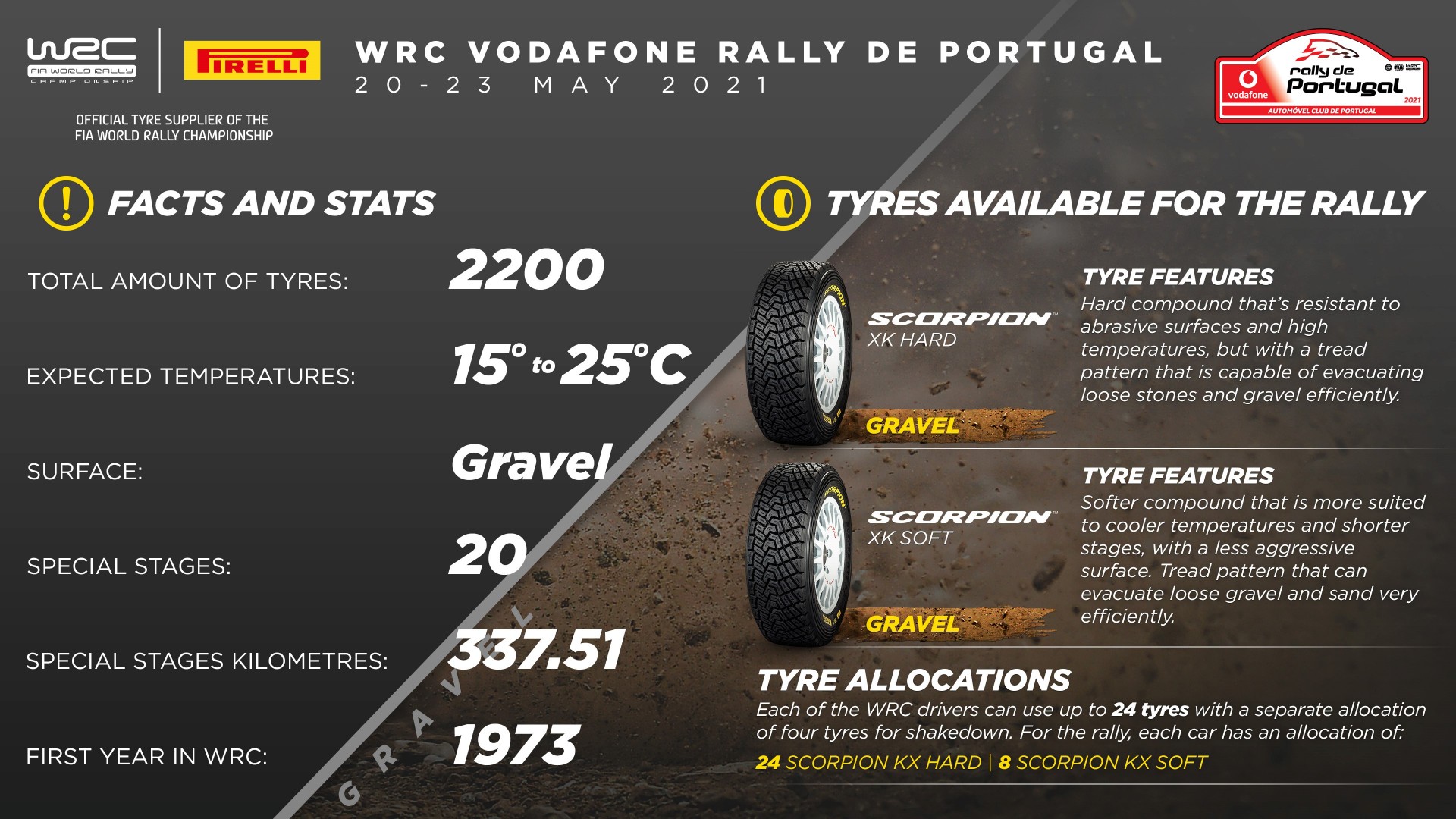 Milan, May 17, 2021 – The FIA World Rally Championship moves onto gravel for the first time this season at the Rally de Portugal, which means a debut appearance for Pirelli’s Scorpion KX WRC tyres that have been developed for the Italian company’s return as exclusive supplier to the series this year.

The Pirelli tyres in Portugal

Scorpion KX: Pirelli’s gravel rally tyre comes in hard and soft compounds. In Portugal, the hard will be the first choice and is designed to cope with the most abrasive surfaces and offer durability over longer stages. The soft will be an alternative providing optimal grip in cooler or damp conditions. In both compounds, the tyre features additional reinforcement, particularly in the sidewall, to guard against cuts and lacerations.

Terenzio Testoni, rally activity manager: “Portugal presents the first full gravel round of the season, the most common surface on the WRC, and as such it’s probably the first indication of the how the cars perform relative to each other under ‘normal’ circumstances. Our testing programme last year placed an emphasis on gravel, so it’s going to be interesting to see how this translates into competition this year. The surface in Portugal is especially tricky, with a hard and rocky base covered by softer and more sandy gravel: one this is why we have chosen the hard compound as the main tyre this weekend. The Scorpion KX makes its debut for the top class of World Rally Cars, while the K used for the RC2 cars is a tried and tested product that has already been used extensively in competition.”

Pirelli will bring around 2200 tyres to Portugal, of which 400 will be for the top class of World Rally Cars.

Pirelli will also supply 1400 tyres to the other four-wheel drive cars in the event, including those entered in WRC 2 and WRC 3:

There are another 200 tyres for those competing in Junior WRC, for which Portugal is round two of the season:

The big number: 337.51. Rally de Portugal is set to be the longest event of the WRC so far this season, with 337.51 competitive kilometres lying ahead of the drivers.

Portugal can be among the toughest rallies of the season for tyres. The gravel surface is generally sandy and soft, but this can quickly degrade to expose sharp rocks and stones underneath. Strategies can therefore differ considerably between the first and second passes of stages.

Service-free Friday. While the event is based in Porto in the north of Portugal, most of the opening day of the rally will take place further south near Coimbra, which hosts the ceremonial start. As a result, there is no midday service on Friday lunchtime, meaning the drivers will need to take care of their cars – but they will get to change tyres.

“On the start line of Arganil, I told my co-driver, Christian Geistdorfer to tighten his seat belts. I wanted to make everyone else hand in their driving licences at the end of that stage. I wanted to beat them all. You take confidence from your preparation and you take your courage from confidence.”