Antonio Cairoli just misses MXGP victory by one point while Jeffrey Herlings gets back to winning ways in MX2. The Dutchman and Tim Gajser continue to front the MX2 and MXGP championships

The superb TT Circuit Assen - a stage that has seen many famous battles in road racing - hosted the FIM Motocross World Championship for the second year in a row. The track built for the sixteenth round of 2016 season and the Grand Prix of the Netherlands was formed from sandy terrain with a firm base and Pirelli’s riders excelled thanks to the excellent SCORPION MX™ 410™ rear and the SCORPION™ MX32™ Mid Soft front; tyres that provided good performance on the wet surface after a heavy downpour that has completely flooded the track on Sunday morning.

Antonio Cairoli grabbed second position overall in the MXGP class. The Italian was able to avoid major mistakes in the first race across a very tricky track and then won the second outing. An excellent third place was taken by Glenn Coldenhoff, who posted his best finish of the season in front of an appreciative home public. Pirelli tyres permitted strong performances also from Max Nagl and Jeremy Van Horebeek who took fourth and fifth positions overall respectively. Several crashes slowed Tim Gajser but the Slovenian remains in command of the championship standings. 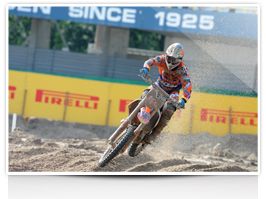