Robert Kubica triumphed at the Monza Rally with Pirelli tyres 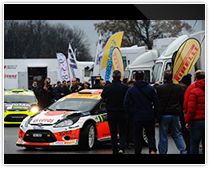 This year Pirelli won all the Rally’s classes with an all-star line-up using its tyres at the Monza Rally in Italy. The former grand prix winner Robert Kubica took the lead from multiple motorbike champion Valentino Rossi on the final stage. He won using Pirelli tyres on a Ford Fiesta RS WRC, in difficult, mixed conditions where tyre choice was fundamental to victory. Following his spectacular return to WRC action in Spain last month, extreme sports ace Ken Block was back on Pirelli tyres for the his Monza debut, finishing 29th on the highly specialised rally. Making his rally debut with Pirelli was NASCAR star Kurt Busch, who improved steadily in challenging conditions that were completely alien to his usual racing environment, finishing 32nd. The R5 category was won by eight-time Italian Rally Champion Paolo Andreucci, who also finished 12th overall in his Pirelli-equipped Peugeot 208 R5. Former Italian Rally Champion Luca Rossetti made it a Pirelli one-two in Monza in the R5 category. There were Pirelli wins in the supporting categories as well: Giuseppe Freguglia won the Super 2000 in a Skoda Fabia, while Luca Tosini won the two-wheel drive class in a Renault Clio. On the crucial final day, they all used the RE rain tyre with a specially designed cut in order to further expel standing water. Of the 94 starters in the modern section of the rally, 83 chose to run on Pirelli tyres. The historic section of the rally was won by Massimo Pedretti in a Lancia 037, who dominated the event from start to finish. The Masters Show – a stand-alone event run over a single stage at the very end of the rally – was won by Kubica as well, in heavy rain conditions, to complete a perfect weekend for the Pole. 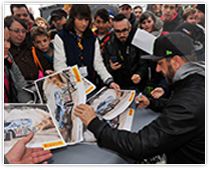 Pirelli’s entire rally range was represented at the Rally di Monza, including the RK tyre as used on the World Rally Championship (along with its RKW rain variant) and the RX asphalt tyre, in hard ,(RX5D) medium (RX7B) and soft compound (RX9). For rain, the RE7A intermediate tyre was also available, used throughout all three days of the rally.