The 2013 FIM Motocross World Championship reaches its conclusion with victory for the two Pirelli riders, Antonio Cairoli in MX1 class and Jeffrey Herlings in MX2, taking the number of titles that Pirelli has won in this sport to 60. Pirelli won its 59th world title in the FIM Motocross World Championship thanks to the performance of 18-year-old Dutchman Jeffrey Herlings who put the outcome of the MX2 championship beyond doubt in Loket with three rounds to spare. Racing the factory SXF 250 fitted with Pirelli Scorpion MX MidSoft 32F front and Scorpion MX MidSoft 32 rear tyres, this is the second consecutive title for the KTM rider who has demonstrated his extraordinary superiority by winning all 14 rounds held. Herlings sealed the title in the Czech Republic after recording his twelfth double of the season, this time finishing ahead of the other Pirelli riders Christophe Charlier, Aleksandr Tonkov, Alex Lupino and Jordi Tixier. Thanks to the lead of 90 points racked up in the first 15 rounds, Antonio Cairoli, the 27-year-old from Messina, settled the 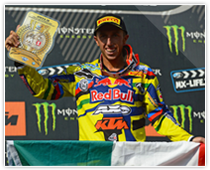 championship in the first race of the British Grand Prix on his KTM SX 350 fitted with Pirelli Scorpion MX MidSoft 32F front and Scorpion MX MidSoft 32 rear tyres after passing rival Clement Desalle who was still in with a chance of winning the title. For Cairoli this was the conclusion of an almost perfect season that has rewarded him with his seventh world title, making him the second most successful rider in motocross history behind the Belgian Stefan Everts.