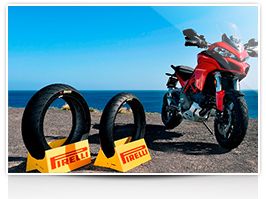 The new SCORPION™ Trail II is the synthesis of the meeting of two worlds: the field of off road competition and the long distance road trip. Designed for the most demanding motorcyclists, it features key points of excellence; high mileage, consistency of performance for its entire tyre life and top notch wet behaviour. SCORPION™ Trail II is the new Pirelli tyre specifically designed to meet the most demanding expectations of this market, with an aggressive tread pattern supported by strong technological innovation, giving good stability even at high speed, traction on dirt, handling, comfort and grip in all riding conditions. The word SCORPION™ recalls immediately the range of Pirelli products intended for use in off-road competitions not only in the two-wheel world but also on four wheels. The products in the SCORPION™ line are present in offroad car racing competitions, in the Enduro and Cross Country Rally World Championships and in the Motocross World Championship in which the range of off-road Pirelli tyres has been the undisputed leader for over 30 years with 62 world titles. The enduro street market remains a segment where motorcyclists’ expectations are always high and where motorcycle manufacturers continue to invest in launching new uprated products every year. 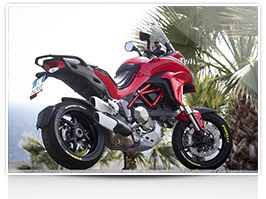 Who is it aimed at? Suitable for the latest generation adventure touring and enduro street motorycles able to tackle even long journeys, with light off-road sections, the new SCORPION™ Trail II is a tyre with good road performance, yet capable of tackling unpaved surfaces. It is designed for motorcycles such as the Ducati Multistrada, models which are increasingly being purchased by riders strictly for use on the road but which, if necessary, may also face stretches of dirt and light off-road.

The enduro street segment The enduro segment was born during the 80's when motorcycles equipped with a 21" front tyre began winning the most prestigious African rallies. Gradually these bikes reached the road in long distance raids, and thus their evolution of use reached a parallel evolution of the size of the tyres they mounted: the rear wheels became larger, while the front shrank to 19". The revolution in the development of the segment arrived in 2003 when Ducati introduced to the market the Multistrada, a bike made to take on winding mountain roads and for competitions such as Pikes Peak. As a privileged partner of Ducati and for the Multistrada, Pirelli created the SCORPION™ Sync, the first ‘knobbly’ looking street sport tyre in 120/70-17 and 180/55-17 sizes. Now, a decade later, Pirelli will once again be the leader of a revolution in this segment, thanks to the introduction of the SCORPION™ Trail range in the rear dual-compound 190/55-17 size that marked the dawn of a new generation of street enduro machines such as the new Ducati Multistrada 1200. In recent years the enduro street segment has become one of the most important in the market and Pirelli decided to develop tyres with more road performance, but with an off road look, with particular attention to the handling in different road conditions. 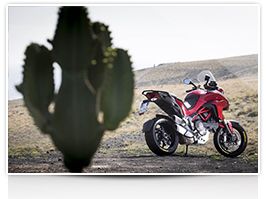 The tread pattern The innovative tread pattern of SCORPION™ Trail II is the result of this famous Off road line enriched with the experience gained by Pirelli with the development of ANGEL™ GT, considered the reference tyre in the Sport Touring segment. The tread pattern of SCORPION™ Trail II therefore has an aggressive look typical of an off-road tyre, behind which there are class performances combining the features of an enduro product, with those of a sport touring one. The side grooves of the new SCORPION™ Trail II have been designed to ensure optimal drainage in case of rain, while the layout and "binary open" shape of the central ones not only contribute to the drainage of water but also ensure better traction, greater stability and more regular wear. The compounds Pirelli was the first company to introduce the bi-compound solution in some rear sizes of enduro street tyres with the SCORPION™ Trail. Today, the Italian tyre company is able to apply this technology to all of the rear tyres in the SCORPION™ Trail II range. Compared to its predecessor, the new tyre has a compound developed for high mileage without compromising cornering performance, and especially developed to offer excellent wet behaviour. The side compound was designed to optimize the balance between performance on dry and wet roads. The profiles The profiles of SCORPION™ Trail II are derived directly from those used for ANGEL™ GT, the winner of important sport touring tyre comparatives made by the most prestigious international magazines. Thanks to a shorter, wider, contact patch area, the profile helps to reduce and level the wear of the tread, thus ensuring greater mileage. Still with the application of new profiles it has been possible to increase the handling which remains unchanged throughout the whole life of the product. All of these factors benefit traction and give better machine control. 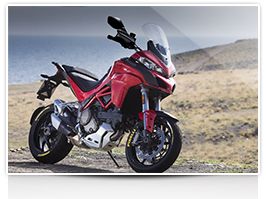 The structure Thanks to the structure developed to enable the central and lateral compounds to work optimally, the new SCORPION™ Trail II ensures high performance, even at full load or with heavier motorcycles. This provides improved wet performance than its predecessor and an incredible versatility, making it comfortable even for long trips and on winding roads and in case of adverse weather conditions. The sizes The new SCORPION™ Trail II is available in the following sizes: