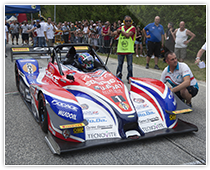 Simone Faggioli claimed his ninth title of the FIA European Hillclimb Championship. The Pirelli driver equals the record for the most number of titles in the sport, with his victory at the Ilirska Bistrica hillclimb in Slovenia. Faggioli won seven out of 10 rounds this year to clinch the championship, driving a Norma M20 FC protoype. Faggioli used Pirelli’s hillclimb tyres to secure his latest title, which use a lot of the cutting-edge technology seen in FORMULA 1. These P Zero hillclimb tyres are available in three compounds – soft, supersoft, and ultrasoft – as well as a Cinturato wet tyre for heavy rain. The unique and challenging conditions of hillclimbing require a tyre that can deliver top performance instantly, with a rapid warm-up even in the cold conditions that often characterise this high-powered and high-altitude sport. “Tyres are such a crucial part of this sport, so I want to thank Pirelli for all the improvements we have made over the course of the year,” said Faggioli. “The team also has done a fantastic job. It wasn’t such an easy start to the year, but things got better and better, so to equal the record is absolutely fantastic. I couldn't be happier.” The 37-year-old has spearheaded Pirelli’s development of its hillclimb tyres, which have proved to be extremely effective in a huge variety of conditions and are manufactured in Pirelli’s new motorsport facility in Slatina, Romania.