Soft and supersoft P Zero tyres for GP2 in Monaco 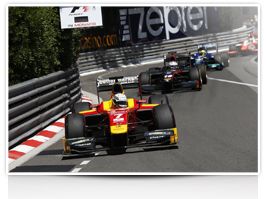 The streets of Monaco play host to the second round of the GP2 season, with the P Zero Red supersoft to be used for the first time in 2016 alongside the P Zero Yellow soft. The two softest compounds in the range for GP2 will provide drivers with the optimal grip and performance around the tight and twisty track, as well as the best tyre warm-up. That will be particularly valuable in qualifying, which is split into two 15-minute groups for Monaco, leaving drivers with very limited time to get up to speed on this most challenging of circuits. In the race, drivers have to manage these softer compounds well to get the best from them, and put themselves in a position to take advantage of any opportunities that arise. Pirelli’s racing manager says: Mario Isola: “In Monaco there is very little room for error, and there are also not a lot of opportunities for overtaking. Finding speed in qualifying is therefore important, but not easy with such short sessions when mistakes can be costly. If qualifying doesn’t go to plan, tyre strategy still creates possibilities for progress to be made, particularly in the feature race where the right strategy can help a driver find clear track and vault up the order. Stoffel Vandoorne was rewarded for a good strategy and fast pit stop when he won from fourth on the grid in 2015 – which proves that a place on the front row of the grid isn’t essential for victory. With the soft and supersoft in use, tyre management is also important and can help to create some very close racing.” The challenge for the tyres: The teams run the cars with maximum downforce in Monaco, but the relatively low average speed means mechanical grip from the tyres is the key aspect to cornering. Wear and degradation are low, however. There is considerable track evolution over the event, with the public roads starting out very slippery but increasing in grip as more rubber is put down in each session. With GP2 sessions taking place at different times of the day, the drivers will face varying conditions every time, making it difficult to gauge wear and degradation. The tight nature of the track means that crashes, and therefore safety cars and even red flags, can be common in Monaco. Races can be won or lost on the strength of strategy decisions made at these moments, so the best strategy is a flexible one. The race and the rules: There’s a unique timetable for GP2 in Monaco, where the race weekend starts on a Thursday and the roads are opened back up to the public on Friday afternoon. The two qualifying groups hit the track at 16:15 and 16:39 on Thursday, following a practice session for all at 12:00. The feature race on Friday at 15:40 lasts 42 laps and each driver must complete one compulsory pit stop. This cannot take place within the first six laps. Unlike Formula One, the drivers do not have to start the race using the tyres they qualified on. The sprint race is on Saturday at 16:10, and the grid is determined by the finishing order of the first race, with the top eight positions reversed. It is run over 30 laps, with no compulsory pit stops. Every car will have five sets of dry tyres and three sets of wet weather tyres available for the GP2 race weekend. The five sets of dry tyres comprise three sets of the harder compound (soft) and two sets of the softer compound (supersoft). The drivers can use their tyre allocation in any way they like, but at least one set of each compound must be used in the feature race (unless it is a wet race). One set of the soft compound must be returned after free practice.