Solberg stars for Pirelli in Portugal 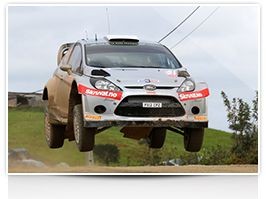 Norwegian driver Henning Solberg has equalled his best-ever result on the Rally de Portugal, round four of the World Rally Championship, and claimed the best overall result for Pirelli in its comeback year by finishing fifth. This year Pirelli is focussing on customer competition, and just as he was on his last rally in Sweden, Solberg was the top privateer home in Portugal, co driven by Ilka Minor in a Ford Fiesta RS WRC. The Norwegian beat four factory cars that had mechanical problems or were forced to re-start, underlining the safety and performance of the all-new Pirelli Scorpion gravel tyre on its debut appearance fitted to a World Rally Car. Not just that, but Solberg experienced considerably less tyre wear than his rivals. As a result, he was able to save a fresh set of soft tyres for the final day, unlike other drivers who had to rely on used tyres. At one point Solberg climbed as high as fourth overall, before dropping back on the penultimate stage. The 42-year-old Solberg is only contesting a selected programme of rallies this year but nonetheless he was able to fight with the frontrunners. As usual, the rough gravel roads of Portugal proved to be extremely demanding but the unique tread pattern of the new Scorpion XR ensured that Solberg was able to stay on the road and keep tyre wear firmly under control. This was despite only trying the tyres for the first time in the shakedown. "I am very satisfied. It is my first time in the car on gravel, and my last rally before that was Sweden, so for this position I am very, very happy,” said Solberg. “I will go faster in the future. I am older but I have five more years of driving and I am motivated for it. I am 100 per cent sure that I can beat the young drivers; I just need to get two days of testing. I am very fast; I just have to improve a bit more physically." Pirelli's other competitors in the lower WRC2 class were affected by various mechanical misfortunes, which meant that they were not able to perform to their full potential. Nonetheless, they also showed promise on the challenging roads around Faro. Pirelli’s senior tyre engineer Matteo Braga commented: “To come here and score this result with Henning is extremely encouraging. It’s not just the performance of the new Scorpion tyre that we were pleased with, but also the wear rate: a key part of Henning’s success as it enabled him to conserve some of the allocation of his soft tyres. Portugal is one of the hardest events of the year, as the rate of attrition showed, but the design of the tyre provided all the grip that was needed, enabling a privateer driver such as Henning to be challenging for the top places. Our priority was also to minimise wear, in order to make one set last for as long as possible.”