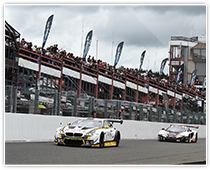 “Once again, the Spa 24 Hours provided a fantastic showcase for GT3 racing and the close competition that it brings, which is one of the most relevant disciplines for our Ultra High Performance road car tyres thanks to a direct technology transfer between the two. At Spa this year we supplied a record number of tyres on what was one of our busiest weekends of the year” said Pirelli’s circuit activity manager Matteo Braga. The all-new Rowe Racing BMW M6 crewed by Philipp Eng, Maxime Martin and Alexander Sims has won the Spa 24 Hours, after the Z4 won with Pirelli last year. The 65 crews that started the Spa 24 Hours used the full range of Pirelli tyres over the course of the epic race, which was generally less rain-affected than in previous years and so allowed competitors to use mostly the DHC slick tyres rather than the WH rain tyres. The competition was extremely close: even after nearly 18 hours of racing, the top two were separated by just half a second, with the winner in doubt right up until a torrential rainstorm with just half an hour to go. Up until the heavens opened, this was also one of the most reliable Spa 24 Hours seen, featuring only a minimal number of retirements. Key to the BMW’s victory was its ability to maximise the mileage of the tyres during longer stints and the cooler conditions of the night in particular, without a noticeable drop-off in pace. As well as endurance, the P Zero tyres supplied to the championship also demonstrated plenty of speed: despite incurring penalties adding up to eight minutes due to a technical infringement, one of the Mercedes GTs that originally dominated the super pole session fought its way back up to second overall from the very back, with three Mercedes in the final top 10.