STRATEGY MAKES FOR AN EXCITING END TO THE FORMULA 2 SEASON

The Formula 2 season came to an end with more exciting racing in Abu Dhabi. Tyre strategy came to the fore with the two softest compounds nominated: the P Zero Red soft and P Zero Purple supersoft.

Feature Race, the winner: Sergio Sette Camara took victory for DAMS, securing an emotional teams’ title for the French outfit, whose founder Jean-Paul Driot passed away earlier this year. The Brazilian started from pole position but slipped to third at the start behind Louis Deletraz and Callum Ilott, with all three starting the race on the supersoft tyre. After they pitted for soft tyres, Sette Camara had the strongest pace, and overtook Deletraz for the victory in the closing stages.

Sergio Sette Camara: “It was an exciting race for sure. When you lose the lead it's like you never took pole, and especially off the line like I did. It was a race where you had to recover your tyres and it was difficult to know exactly where the pace was at, but in the end we worked well as a team. DAMS and my engineer were letting me know the pace, I was taking clever decisions, it was a good pit stop and clearly a good car as well. In the end it worked.”

Feature Race, alternative strategy: Nobuharu Matsushita and Guanyu Zhou joined Sette Camara on the podium after starting the race on the soft tyre: a choice that helped Matsushita to take the lead by lap four. He led much of the race under pressure from Zhou, and after they pitted for supersofts near the end, they used their stronger pace to overtake Deletraz and finish second and third respectively.

Sprint Race, the winner: Luca Ghiotto won the sprint race from third on the grid, with all the drivers using the soft tyre. Nicholas Latifi, who will race in Formula 1 for Williams in 2020, finished in second place to secure the runner-up position in the championship ahead of Ghiotto and Sette Camara, who came from eighth on the grid to finish the race in third.

Pirelli’s head of F1 and car racing Mario Isola: “Once again, Abu Dhabi showed how our Formula 2 tyres, with a deliberately high level of degradation helped to provide a great show and some great racing, with drivers managing their tyres to make the most of each compound’s capabilities and maximise their results, sometimes from further back the order. This brings the era of 13-inch tyres in F2 to a close as we look forward to the advent of new 18-inch tyres next season, which will set the tone for Formula 1 in 2021.” 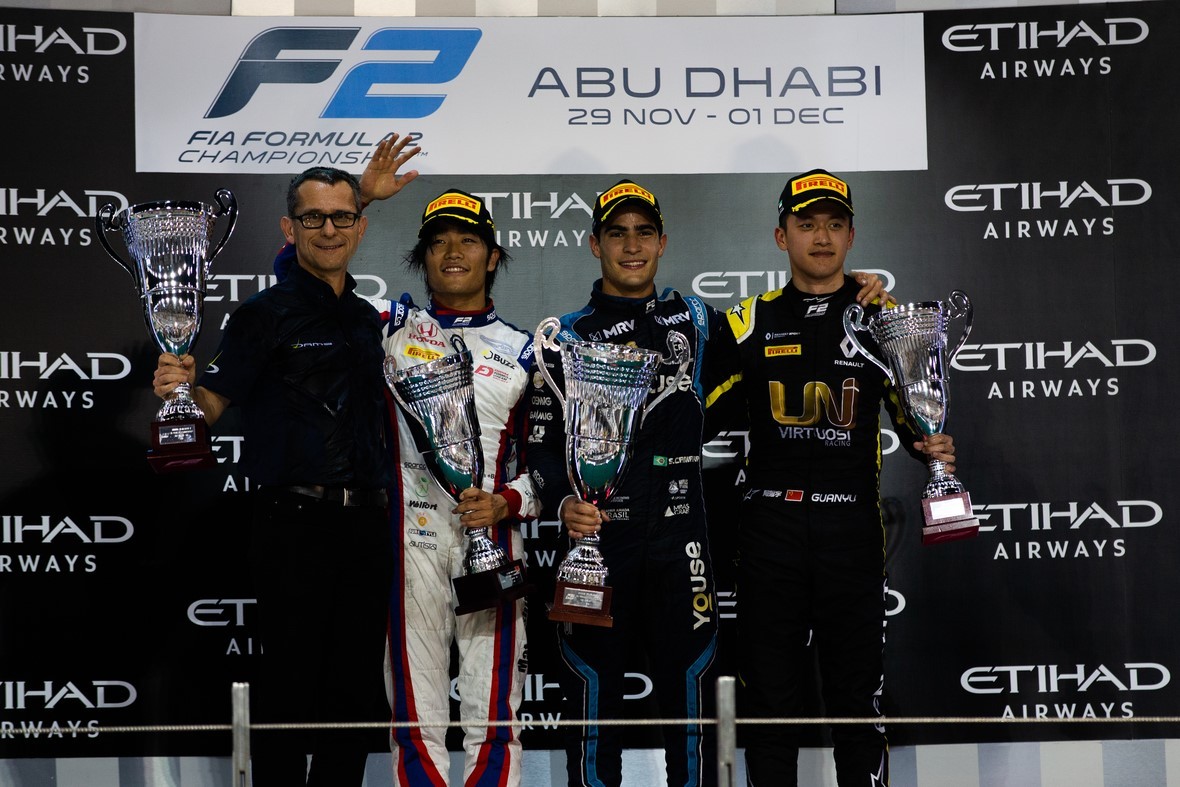 Sette Camara won the feature race, while Matsushita and Zhou used the alternative strategy to finish on the podium