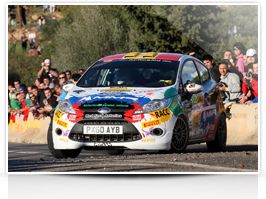 The Rally of Spain, the final round of this year’s Pirelli-equipped WRC Academy, was a mixed event in every sense: not only were there asphalt and gravel surfaces (with Friday’s action held largely on gravel and Saturday’s stages run on asphalt) but also a huge variety of weather. The massive spread of different conditions underlined the versatility and grip of Pirelli’s tyres, which are used exclusively by the WRC Academy – a formula that pits up and coming young drivers against each other in identical Ford Fiesta R2s run by renowned preparation firm M-Sport. With the championship title already clinched by British driver Elfyn Evans on the last round in France, the runner-up spot was still up for grabs in Spain, with four drivers in contention for second place. Friday’s six opening gravel stages, close to Tarragona, proved to be a baptism of fire. From the second stage onwards, torrential rain turned the gravel stages into a mud bath, with deep ruts filling up instantly with water and making all the action just a question of survival. Throughout the chaos, local man Jose Suarez kept his calm and emerged with a healthy lead on the first day that he was never to lose. Many drivers got stuck on SS5 and had to retire for the day, rejoining under the Rally 2 regulations. The second day – containing the longest stage of the rally, Terra Alta, at 45 kilometres – was run in dry asphalt conditions, with Suarez just having to control his lead of more than a minute. The Spaniard eventually claimed his very first WRC Academy victory: crucially clinching the championship runner-up spot ahead of Australia’s Brendan Reeves. The Australian finished sixth in Spain: not quite managing to maintain his impressive record of finishing in the top five of every round until now. He was handicapped by a technical problem on Friday that meant he was forced to restart under the Rally 2 regulations on Saturday morning. The change of surface from Friday to Saturday meant a change of set-up and tyre. On the gravel stages the Academy drivers used the K4 gravel tyre: the same pattern and compound that they have used on all the gravel events this year. Although teams are not allowed to cut the tyre to disperse mud and water, the K4 did a very impressive job to find grip in conditions that were reckoned to be the worst of the year. Many drivers reckoned that the amount of standing water in places was even worse than Portugal at the start of the season – where an entire afternoon of action was cancelled due to the treacherous conditions. For Saturday, the cars were converted to asphalt specification, with many drivers using the RE7 asphalt tyre in the damp conditions of the morning – the roads still wet from Friday’s rain – before moving onto the harder RX5 (for dry roads) in the warmer conditions of the afternoon. A number of drivers started the day with a mix of tyres: RX on the front and RE on the back, with two additional RX tyres as spares. The RE7 tyre is a medium compound (the higher the number, the softer the rubber) designed to warm-up quickly and offer strong adhesion through corners in wet or damp conditions. The RX5 is the dry asphalt tyre – offering the maximum possible grip thanks to its stiffer construction combined with a squarer profile, a lightly-grooved tread pattern, and a consistently reactive compound. Swedish driver Pontus Tidemand was second of the Academy drivers in Spain, having won five out of six stages on the opening day, while newly-crowned champion Evans was third. Pirelli’s senior tyre engineer Matteo Braga commented: “Even though the only championship battle was for second place, the drivers still fought as hard as they would for a win. All of them apart from one got to the finish, often setting times that were faster than many more powerful two-wheel drive cars on this event. This underlines the maturity of the drivers, the performance of their cars, and the quality of the Pirelli tyres. Their task was made more complicated by conditions that were almost certainly the worst seen all year. Suarez’s trouble-free run on Friday set up his victory on Saturday, meaning that he only needed to manage his advantage to seal a memorable win on home territory and the runner-up spot in the championship, having also finished second on the last round in France. I’d like to thank all our competitors this season – it’s been the strongest year yet in terms of competition and talent – as well as M-Sport, for helping us to showcase the capabilities of our tyres in such a spectacular way to boost the careers of these promising young drivers through the WRC Academy concept.”