As the European Grand Prix got underway this weekend in Valencia, Pirelli - sole supplier to Formula One and its feeder series for a three year period starting from 2011 – successfully equipped GP2 and GP3 drivers for the first time with its P Zero soft compound tyres enjoying some hot and action-packed races. 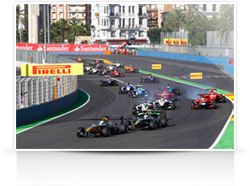 Pirelli decided to supply both series with its soft compound slicks because of the specific layout of Valencia’s street circuit. This tyre compound was also the best option to increase on-track action on this highly technical track thanks to its consistent but less durable features. Pirelli’s Racing Manager Mario Isola explains: “This was the first time our GP2 and GP3 P Zero soft slicks were seen on track this year and I’m glad to say that they enjoyed a very successful debut over the weekend. We saw some exciting races with several overtaking especially in the corners with our tyres powering the show and spicing up the competition. Though the track conditions were extremely hot, our GP2 and GP3 slicks showed comparatively low levels of degradation. Due to the demands of this technical street circuit, the rear tyres had the toughest part but most of the drivers has the right set-up and managed to take good care of their rubber. ” FRIDAY JUNE 24, 2011 Action got underway on Friday after Formula One’s first morning practice with the GP2 drivers getting a first taste of Pirelli’s soft tyres running on a clean track at noon. Luckily the sky was filled with clouds which kept the heat under control, stable at 38 degrees centigrade for the tarmac and 28 for the air throughout the day. Jules Bianchi (Lotus ART) stole the top spot in GP2’s practice session setting a best lap of 1m47.681s, half a tenth faster than runner up Giedo van der Garde (Barwa Addax Team). Because of two red flags and a few yellow flags, an average of only 10 laps were completed with the new rubber experiencing non-significant levels of degradation. Third-best in GP2 practice Luca Filippi (Super Nova Racing) commented: “Though it was the first time I was running on Pirelli’s soft tyres, I was quite confident as I’ve always had a better feeling with Pirelli’s softer compounds which perfectly suit my driving style and the car set-up. As the supersoft rubber in Monaco, the soft tyres in Valencia proved to be very consistent, well balanced between the rear and the front, easy to warm up and with good grip from lap to lap.” GP3’s first practice followed with Alexander Sims (Status Grand Prix) securing a fastest lap time of 1m59.708s in the final part of the session. The British driver had been also the quickest on track during mid-season tests at Valencia’s permanent circuit last week, always running on Pirelli’s P Zero soft compound tyres. After Formula One’s second practice, GP2 drivers were back on track for their qualifying session which was a closely-fought battle for pole position till the final lap. Barwa Addax’s drivers - Frenchman Charles Pic and Dutchman Giedo van der Garde - were the fastest on track distanced by a 0.056s gap. Thanks to a 1m46.675s laptime, Charles Pic stole the top spot from his teammate with only two minutes left to go, after having gone for a fresh set of tyres half-way through the session as also the entire field did. Pole-sitter Charles Pic (Barwa Addax Team) commented: “As it was the first time I was running on Pirelli’s soft compound, it was a bit trickier to get a good feeling with the new rubber from the beginning. Qualifying was aggressive and I struggled a bit to keep the rear tyres till the end of the session. Nevertheless I managed to push hard, save my tyres and eventually be the fastest on track.” The day came to an end with the GP3 drivers completing their second and final free practice with a number of drivers taking turns at the top of the time sheet. In the final part of the session Tom Dillmann (Addax Team) had the upper hand on his rivals, setting a fastest laptime of 1m58.969s. SATURDAY JUNE 25, 2011 Formula One drivers were the first to hit the track on Saturday, completing their last free practice under extremely hot ambient conditions. GP3’s qualifying was next on the schedule with three British drivers getting on top and Lewis Williamson (MW Arden) on pole thanks to a 1m58.693s best laptime set in the final minutes of the session. Once Formula One’s qualifying was over, GP2 drivers took the track for their feature race on a well-rubbered 42 degree centigrade track. Though overtaking opportunities are quite limited in Valencia, this time there was lots of action going on in the front rows and especially in the corners. Great racing took place around the pit stops with the teams putting in place a number of different strategies. Most of the drivers only pitted once between lap six and 15 and changing mostly their rear tyres, with the top five going for a fresh set only after lap 12. Most of those who pitted later in the session proved to be good at looking after their rubber. The new tyres powered the second part of the race with the front runners always in the 1m50s, though race winner Grosjean’s remained unbeaten thanks to a fastest laptime of 1m49.591s set on lap 20. With Grosjean leading the field from the front, the fight was all between Giedo van der Garde (Barwa Addax Team) and Davide Valsecchi (Caterham Team AirAsia) who eventually finished on the podium respectively first, second and third. Former Pirelli test driver and race winner Romain Grosjean (DAMS) commented: “It’s a tough championship and the new tyres make it even tougher. Honestly, I do like the Pirelli tyres very much because from this year we all have to concentrate on tyre management which is quite a challenge. In the end, it’s up to us drivers to make the difference during races.” Competition drew to an end with GP3 race one taking place right afterwards. Thanks to a good start, third-qualified Andrian Quaife-Hobbs (Marussia Manor Racing) led from the front, perfectly managing his soft tyres for 14 laps and taking a dominant first win. GP3 race one winner Andrian Quaife-Hobbs (Marussia Manor Racing) commented: “Having tried out the P Zero soft tyres in GP3 mid-season tests before, this new compound wasn’t a big surprise to me. However, the overall performance of this tyre seemed quite different during both practice and qualifying. In practice it was quite constant in terms of grip and performance while during qualifying it was at its peak over the first laps and it had a constant drop-off, as expected. We adjusted the car set-up accordingly and managed to get the best out of the whole package during the race.” SUNDAY JUNE 26, 2011 On Sunday morning GP3 drivers were back on track for their second 14 lap race which was won by James Calado (Lotus ART) followed by runner up Alexander Sims (Status Grand Prix) who enjoyed a great performance loosing places at the start but then making it back proving that it is difficult but not impossible to overtake in Valencia. Second-placed Alexander Sims (Status Grand Prix) commented: “Pirelli’s soft tyres gave me good grip for a long time and I didn’t experience much degradation at all. Still it was difficult to properly look after the tyres and save them till the end but I enjoyed it and it was good fun.” Then it was the turn of the GP2 sprint race with Pirelli’s soft slicks faultlessly completing 23 laps on a well-rubbered track especially before and after the corners because of braking and traction. Competition was aggressive with the drivers making some great moves, pushing on their tyres during the final laps and fiercely fighting the final podium spot. 2010 GP3 champion Esteban Gutierrez (Lotus ART) took the lead distancing his followers and winning the race. Third-placed Giedo van der Garde (Barwa Addax Team) said: “It was quite hard to properly manage the tyres, especially the rear ones. We had fine-tuned the car set-up for yesterday’s race which worked perfectly keeping degradation under control. We didn’t change much for today’s race and it worked quite well though I was experiencing some problems in the final laps. Nevertheless I had good grip and managed to jump from P7 to P3.” Pirelli’s Racing Manager Mario Isola concluded: “The Valencia track is quite a unique street circuit as it features a wide variety of corners and several high-speed sections combined with a smooth surface. It is quite a challenge to choose the best tyre compound to be race also because of the weather which is normally quite hot and can contribute to tyre overheating. We opted for our soft tyres as they are a very consistent product which performs very well even under high track temperatures, ensuring good grip even on road tarmac. Durability is less compared to the harder tyres in the Pirelli GP2 and GP3 range but this was key to increase the spectacle.” Romain Grosjean (DAMS) holds onto the lead in the GP2 driver's championship by a point from van der Garde (Barwa Addax Team), 34 to 33, with Davide Valsecchi (Caterham Team AriAsia) three points back on 30. The top GP2 team is still the Valencia-based Barwa Addax Team, now up to 57 points. The Valencia round crowned Mitch Evans (MW Arden) new GP3 championship leader, on top with 26 points along with his team which leads the standings on 37 points. Pirelli’s GP2 and GP3 tyres will be next seen in Silverstone running from 8-10 July alongside the British Grand Prix. *** For further information, please contact Laura Bartoli on laura@mediatica.co.uk or +44 7500 877 304