Superbackstage is launched, the section of the Pirelli website where you can find a collection of news on the eni FIM World Superbike Championship

This news collection section available at pirelli.com/superbackstage is managed by a staff of Pirelli content curators who, constantly monitoring websites as well as rider and team Twitter™ and Facebook™ accounts, add the most interesting content on the Superbike world, combining it and making it accessible from within the Pirelli website Pirelli launches Superbackstage, the news collection area that groups the most interesting articles on the eni FIM World Superbike Championship found on the net, as well as information published on rider and team Facebook™ and Twitter™ accounts.

Pirelli has set up a staff of content curators who work daily, selecting, grouping, organising and sharing the most important news from sports news websites, rider and team comments on Twitter™ and Facebook™ and videos published on Youtube™. The Pirelli.com/superbackstage page is basically a news hub on the Superbike world that Pirelli has decided to provide its users so they can closely follow news and the latest goings-on, as well as having a space where they are sure not to miss out on anything from the Pirelli two-wheel competition world. For several years the manufacturer with the long P has been investing its resources in the on-line and digital sector, a continuously evolving world which demands the company's constant commitment to providing users with information which is always up to date and products which are increasingly more innovative and interesting. 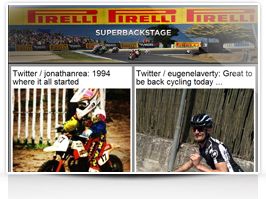 In the area of applications dedicated to the two-wheel world, the Diablo Super Biker app for iPhone/Android was introduced in 2011, an application available in 7 languages which provides bikers with the possibility of viewing the travelled route, also through the on-line tool at pirelli.com/diablosuperbiker. This app is used daily by thousands of bikers and has been downloaded 150,000 times as of today, an extraordinary result which is also confirmed by the international recognition it has obtained. The Pirelli Moto Facebook™ page (http://facebook.com/PirelliMoto ), launched in February of last year and currently approaching 200,000 fans, exceeded all expectations, becoming an extremely popular communication channel in just a few months, followed closely by bikers all over the world. Pirelli Moto is also on Pinterest™ (http://pinterest.com/pirellimoto ) to interact with followers of this social network that exploded in number during 2012 as well as Instagram™ (http://instagram.com/pirellimoto ) with the goal of providing a window into to Pirelli brand events directly to followers, as was done for EICMA 2012 and for motorcycle races such as BSB and WSBK.

Superbackstage is launched, the section of the Pirelli website where you can find a collection of news on the eni FIM World Superbike Championship
Newsroom