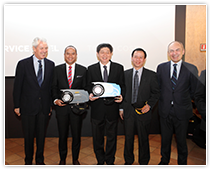 The third edition of the Supplier Awards, with which Pirelli rewards the work of its suppliers, has been held this year. Nine international companies, eight out of which are European, were singled out for recognition based on their performance in 2013. Last year, only one of the nine awards was handed out to a European firm, while this year the spotlight was firmly on European suppliers, with four Italian companies along with four other European companies being awarded. The winners have been selected by Pirelli according to several criteria such as sustainability, quality, service level and innovation. The awarded companies operate in different fields, ranging from natural rubber production to personnel training. Their turnover varies from 0.5 million euro to 70 million euro. Pirelli greatly values collaboration with its suppliers, which are considered essential business partners in order to achieve the 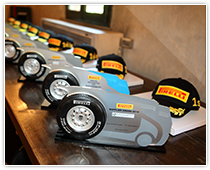 corporate strategy, which is more and more focused on the Premium segment. Pirelli’s Purchasing Department comprises 135 experts from all around the world, 40 of which work at the headquarters in Milano Bicocca. Each year they work with 12,000 suppliers selected on criteria such as security, innovation, materials quality, sustainability, risk level and supply chain efficiency, with an analysis focusing not only on the direct suppliers but also on their own suppliers, through a contractor’s self-evaluation.