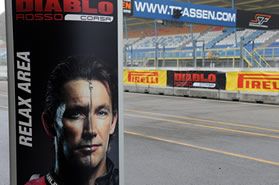 With the launch of the new Diablo Rosso Corsa, Pirelli confirms a technological leadership with roots planted firmly in a commitment spanning years of sportracing activities, the most strategic of which is the Superbike World Championship, where Pirelli is the official supplier for the seventh consecutive year. The Superbike World Championship, as with other national road racing, motocross and Enduro series, remain for Pirelli not only a diverse and continuous testing environment, but also an opportunity to develop new solutions together with manufacturers to meet the needs of motorcyclists. One example is the new Diablo Rosso Corsa, which adopts a patented contact patch technology (EPT), carcass solutions derived from what is used in the Superbike class, and shoulders of its III zones compound rear tyre being offspring a compound featured in the Superstock class.

The commitment of Pirelli in WSBK is well explained by the numbers, certain to be repeated also in the 2010 World Championship which has just begun:

• More than 40 solutions developed each year for the different circuit requirements, weather conditions and driving styles of riders (nearly 48 for the 2009 championship alone)

• Progressive decrease of lap times by as much as 0.8 sec and race time by an average of 20 seconds, signifying faster and more consistent racing as well as a strong stabilization of race performance.

• Pirelli supports each round of WSBK with 8 service vehicles and up to 5,000 tyres (which must be industrialized products due to the quantities needed and the constraints of maximum uniformity), along with 30 staff between tyre engineers providing technical advice and service staff for the mounting / dismounting of tyres to all drivers of different classes.

• Solutions designed by R&D for the track emerge as technical benefits of the product range. Of the available dry solutions used by the Superbike and Supersport riders on the grid last season, one front and three rear solutions have already become part of the 2010 Pirelli Racing range.

With nine manufacturers and nearly 90 riders competing in the four classes of the championship, Pirelli’s seventh year as sole supplier marks a further increase of the absolute performance from its Diablo family of products, thus resulting in technologies uniquely injected directly into new tyres like the new Diablo Rosso Corsa for passionate road and track riding. Due to the industrial processes used to manufacture consistent product for each weekend of the WSBK season, the various technological breakthroughs in compounding, contact patch and structural materials discovered within this environment can be quickly transferred into Pirelli street product.

The first two year period of Pirelli’s relationship was dedicated to refining the service element to guarantee adequate support for all riders in the Superbike paddock. The next step then began with a true search for performance, improving lap times and cornerspeed for an elevated excitement and the shattering of circuit records. Over these last two years, Pirelli has reached a noteworthy stabilization of performance, that being a reduced lap times all the way to the checkered flag.

“After completing six enriching years as a partner in the Superbike World Championship, our team has found a proven formula of developing new technical solutions in this extreme environment, primarily through a commitment and involvement of our whole R&D department who share participation throughout the season. Our ultimate achievement has been the elevation of both performance and quality using an industrial process that allows us to spread these benefits throughout our entire radial tyre range.” – Giorgio Barbier, Racing Director, Pirelli Moto