Kawasaki takes the Manufacturer Championship title in the Supersport category as well, Jordi Torres and Leon Haslam bring victory home to Aprilia respectively in Race 1 and Race 2 and Chaz Davies on his Ducati confirms his second place in the overall standings ahead of Tom Sykes

The Losail International circuit hosted the last round of the eni FIM World Superbike Championship season today.In this round it was the Aprilia riders who triumphed, Jordi Torres in Race 1 and Leon Haslam in Race 2, whereas Chaz Davies astride his Ducati, with a second place finish in Race 2, finished his Championship season in second place overall behind World Champion Jonathan Rea (Kawasaki Racing Team) but ahead of the other Kawasaki rider, Tom Sykes. In Supersport the race win went to Kyle Smith on his Honda but Kawasaki, after winning the Manufacturer Championship title in Superbike, managed to accomplish the same feat in the Supersport category as well. The solutions Pirelli brought to the track performed well, having to take on a difficult weekend due to all of the sand on the track, but they held up against wear nonetheless. 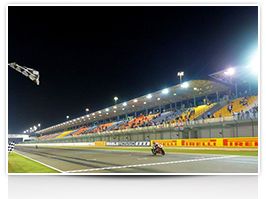 In Race 1 the two Kawasakis ridden by pole man Tom Sykes (Kawasaki Racing Team) and his team mate, the 2015 World Champion, Jonathan Rea, got off the line well straight away. Already on the first turn, Chaz Davies (Aruba.it Racing-Ducati SBK Team) moved between the two standard bearers for the Akashi based manufacturer, with Alex Lowes (VOLTCOM Crescent Suzuki) chasing after the trio. During the second lap Rea overtook Davies to take back the second place he had lost at the start, taking off to chase down Sykes with Lowes also overtaking Davies not long after to move into a provisional third place. In the meantime the Kawasakis pulled the pin, building up an advantage of more than 2.5 seconds ahead of the rest of the group by the sixth lap. In the seventh lap Alex Lowes, trying to keep Davies from overtaking, went long and was forced to withdraw. At the beginning of the eighth lap Jordi Torres (Aprilia Racing Team - Red Devils) overtook Davies to move into third place with team mate Leon Haslam right behind him, also managing to get past the Ducati rider, relegating him to fifth place. The reigning World Champion refused to settle for second place and during the tenth lap he overtook Tom Sykes, moving into the lead. In the meantime Jordi Torres approached threateningly astride his Aprilia, managing to force his way between the two Kawasaki riders at the beginning of the twelfth lap and then, a lap later, overtaking Rea as well for first place. In the final five laps the Spaniard was uncatchable even for Rea who attacked all the way to the end, giving fans a breathtaking race finale. In the end it was Torres who came out on top, riding the Red Devils team Aprilia to the top step of the podium with the two Kawasaki riders behind him - Jonathan Rea second and Tom Sykes third. Rounding out the second row were Chaz Davies, Michael Vd Mark and Leon Haslam. Between the two Superbike races the FIM Supersport World Championship race was held. Taking the race win it was American Kyle Smith (Pata Honda World Supersport Team) ahead of the newly crowned World Champion Kenan Sofuoglu (Kawasaki Puccetti Racing) and Italian Lorenzo Zanetti with the MV Agusta Reparto Corse team. With this result, Kawasaki, after taking the Manufacturer Championship title in the top category, also won the Supersport Manufacturer title with 237 points and an advantage of 15 points over Honda, in second place, and 19 ahead of MV Agusta, in third place. 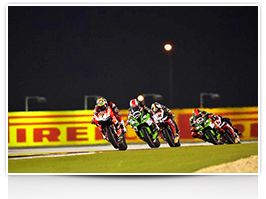 In Race 2 the two Kawasakis ridden by Tom Sykes and Jonathan Rea once again got off the line very well when the lights went out, but from the very first laps it was an immediate battle with Chaz Davies, Leon Haslam and Jordi Torres. At the front of this leading group of six was Ducati rider Chaz Davies, followed by Aprilia rider Leon Haslam and the Kawasaki riders. During the sixth lap Jonathan Rea was forced to return pit lane and withdraw due to a technical problem. Haslam managed to move into the lead momentarily in the twelfth lap but then he was forced to hand it back over to Chaz Davies a few turns later. In the sixteenth lap it was Jordi Torres crashing out and a battle for first place between Leon Haslam and Chaz Davies. In the end it the Aprilia rider got the upper hand, overtaking Chaz Davies on the last turn to snatch the top step of the podium from him. Behind them, finishing third, was Tom Sykes. Comment from Giorgio Barbier, Pirelli Moto Racing Director: “With this round Pirelli concludes its twelfth season as the World Superbike Championship Official Sole Supplier, but our sights are already set on next year. In 2015 we saw the clear superiority of the Kawasaki and its riders, not only in Superbike but also in Supersport. The races today finished with a bang and with the right amount of combativeness which has always been a particular characteristic of the World Championship for factory derivative bikes, perhaps a less competitive season than in previous years, but which provided plenty of excitement for motorcycle racing fans all the way down to the last turn. On our part we must renew our compliments to all of the Champions in the individual categories and to Kawasaki as the motorcycle manufacturer that demonstrated the best consistency in terms of performance this year. As for Pirelli, during the season which has just come to an end, we launched an initiative called Pirelli SBK® Track Days, which provided track days for all bikers who are fans of our brand the Monday following the Superbike weekend at most of the circuits on the calendar. I am pleased to announce that this will be repeated again next year on even more tracks so that we can continue to give our fans a chance to experience the excitement of the World Superbike Championship from an even closer perspective. As for tyre development, I can certainly confirm that all the standard solutions seen in action this year will be confirmed for 2016 as well since they demonstrated excellent performance. I will mention, however, that the range will be expanded with the addition, both on the front and on the rear, of endurance derived SC3 compound solutions which therefore have greater resistance to wear. These solutions could prove to be useful on particularly abrasive circuits which lead to quicker tyre wear.” 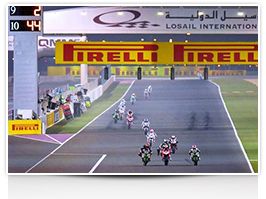 The Pirelli solutions chosen by the riders: In this round the Superbike riders opted for various solutions. On the rear preferences in both races were split almost equally between the standard SC0, chosen, for example, by the Aprilia and Suzuki riders, and the T0611 SC0 development solutions, used by the Kawasaki and Ducati riders. On the front the most used solution was the S1699 SC1 development solution, the tyre which was used the most throughout the 2015 season. Jonathan Rea and Sylvain Guintoli preferred the T1467 SC1 development tyre, which comes the closest to the SC2 solution usually used by these riders. There were only three riders (Badovini, Vizziello and Ponsson) who opted instead for the T1616 SC1 development solution, which is the least known as it was brought only to Jerez and Magny-Cours this year. In the Supersport category most of the riders opted for the standard SC1 tyre for the rear, whereas the remaining 40% preferred the U0442 SC0 development solution. On the front almost all the riders chose the standard SC1, a soft compound that is ideal for medium abrasive tracks like the one at Qatar where the sand blown in by the wind deposits on the asphalt and speeds up normal tyre wear. Pirelli Best Lap Awards: The “Pirelli Best Lap Award” is awarded by Pirelli every race to the rider who sets the fastest race lap for a total of three awards each weekend. The Superbike and Supersport rider who has earned the most “Pirelli Best Lap Award” titles at the end of the season have been elected “Best Lap Winner: fastest rider of the year” and awarded in the usual end of year ceremony. Jonathan Rea, having won 11 Pirelli Best Lap Awards, and Jules Cluzel with 3 are the “Best Lap Winner: fastest rider of the year” in 2015 for the Superbike and Supersport classes. These are the riders who won the Pirelli Best Lap Awards in the last round of the season: WSB Race 1 – Tom Sykes (Kawasaki Racing Team), 1'57.317 (2nd lap) WSB Race 2 – Leon Haslam (Aprilia Racing Team – Red Devils), 1'58.068 (3rd lap) WSS – Kyle Smith (Pata Honda World Supersport Team), 2'02.122 (7th lap) The overall standings at the end of the Championships are as follows: WSB: Jonathan Rea (Kawasaki Racing Team): 11; Tom Sykes (Kawasaki Racing Team): 7; Chaz Davies (Aruba.it Racing-Ducati SBK Team): 5; Leon Haslam (Aprilia Racing Team - Red Devils): 2; Davide Giugliano (Aruba.it Racing – Ducati SBK Team): 1 WSS: Jules Cluzel (MV Agusta Reparto Corse): 5; Kenan Sofuoglu (Kawasaki Puccetti Team): 3; Patrick Jacobsen (CORE'' Motorsport Thailand): 3; Kyle Smith (Pata Honda World Supersport Team): 1 The 2015 Pirelli statistics for the Magny-Cours round: • Total number of tyres Pirelli brought: 2721
• Number of solutions (dry, intermediate and wet) for the Superbike class: 5 front and 6 rear • Number of tyres available for each Superbike rider: 32 front and 33 rear • Number of solutions for the Supersport class (dry, intermediate and wet): 4 front and 4 rear • Number of tyres available for each Supersport rider: 22 front and 24 rear • Temperature in Race 1: air 32° C, asphalt 37° C • Temperature in Race 2: air 31° C, asphalt 34° C • Maximum race speed reached by Pirelli DIABLO™ Superbike tyres: 322.4 kms/h, in Race 2 by Jordi Torres (Aprilia Racing Team - Red Devils) at 13th lap • Maximum race speed reached by Pirelli DIABLO™ Supercorsa tyres in Supersport: 279.1 kms/h, Roberto Rolfo (Team Lorini) at 10th lap.