The collaboration between Pirelli and Royal Enfield is growing: PHANTOM™ SPORTSCOMP tyres are the original equipment of the new Continental GT 650 and Interceptor INT 650

Following the Himalayan model equipped with MT 60™ and the Continental GT 500 cc with SPORT DEMON™, now the new Continental GT 650 and Interceptor INT 650 will be mounted with Pirelli tyres. To celebrate the original equipment supply, Pirelli’s Motorcycle Testing Department climbed the Himalayan chain to reach one of the highest vehicle-accessible passes in the world 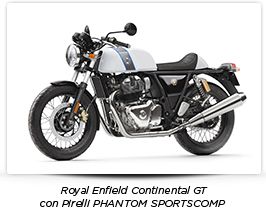 PHANTOM™ SPORTSCOMP is part of a line of historical tyres of the Pirelli Sport Classic range, which includes also the MT 60™ and SPORT DEMON™ models, destined to respond to the heritage trends and chosen by motorcycle manufacturers and customisers, to equip modern café racers, medium-powered custom bikes and modern classics.

Tyres of Pirelli's PHANTOM™ line are legendary. They were produced for the first time back in 1977 and redesigned over the years to keep pace with the most modern technologies. Their constant presence and evolution over the years make it one of the most important brands among motorcycle products made by the "long P" company.

With the new millennium Pirelli revised the PHANTOM™ SPORTSCOMP radically, combining the sporting origin of the Sportscomp with timeless charm and style, thus giving rise to a Sport Classic line within the Supersport segment. Among the strengths of this tyre include the easy handling and change in direction, stable and predictable behaviour under acceleration and braking, being able to transmit power to the ground and regular wear combined to excellent mileage.

In addition, to celebrating and sealing the collaboration with Royal Enfield, an expedition of the Pirelli Motorcycle Testing Department has reached, with two Royal Enfield Himalayan motorcycles equipped with Pirelli MT 60™ tyres, the Khardung La Pass. At 5,359 metres (17,582 ft) high it has long been considered the highest vehicle-accessible pass in the world.

The adventure was realised by Salvo Pennisi, Director of Testing and Technical Relations for Pirelli Motorcycle Division, and by Vincenzo Bonaccorsi, who for Pirelli is the tester responsible for the Original Equipment projects in the Asia-Pacific area.

In India to support normal working activities with Original Equipment companies such as Royal Enfield, the two Pirelli Motorcycle Testing Department representatives wanted to celebrate in this particular way the supply to Royal Enfield. Riding two Royal Enfield Himalayan’s fitted with Pirelli MT 60™ tyres, Salvo Pennisi and Vincenzo Bonaccorsi decided to ride the Himalayan chain; to the Khardung La Pass, one of the highest vehicle-accessible passes in the world in the region of Ladakh, India, north of Leh and considered the gateway to the Shyok and Nubra valleys.

The collaboration between Pirelli and Royal Enfield is growing: PHANTOM™ SPORTSCOMP tyres are the original equipment of the new Continental GT 650 and Interceptor INT 650
Newsroom