The eni FIM Superbike World Championship arrives at the penultimate round: Pirelli at Magny-Cours to continue development with an eye to 2016

With titles decided in Superbike, Superstock 600 and European Junior Cup classes, the French event will surely be decisive for the Superstock 1000 class and possibly for Supersport 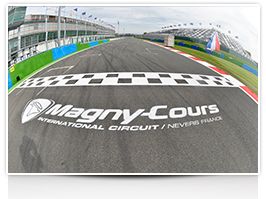 The eni FIM Superbike World Championship approaches the grand finale and next weekend will make a stop at the French circuit of Nevers Magny-Cours for the penultimate round of the season. With World titles already assigned in Superbike, Superstock 600 and European Junior Cup classes, the French event will be the last of the season for the Superstock 1000 class and therefore decisive to decide the winner of the category. There is still two races to go for the Supersport class, but already in Magny-Cours, the 2015 World Champion could be elected. In Supersport Kenan Sofuoglu (Kawasaki Puccetti Racing) has effectively put a strong claim to the 2015 title. With his rival Jules Cluzel (MV Agusta Reparto Corse) out of the game probably until the end of the Championship, the Turkish rider has 33 points of advantage on US Patrick Jacobsen (CORE'' Motorsport Thailand), who is now second in the standings, five points ahead of Cluzel. 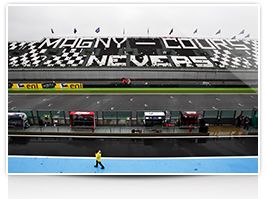 As for the Superstock 1000 FIM Cup, Lorenzo Savadori (Nuova M2 Racing) is very close to winning the title. The rider from Cesena has a lead of 25 points over Roberto Tamburini (Team MotoxRacing). Therefore, even if the latter were to win the last race, for Savadori it would be enough to gain one point to win the title. In case Savadori is not able to score any points and Tamburini win the last race, the rider from Team Motoxracing would win the World Title, even with equal points and victories, he would have won the last race. Even if the Superbike World Championship is now close to an end, Pirelli continues its development work. In the premier class, in case of rain, the riders will have the chance to try a new rear DIABLO™ Rain solution which is completely new and different from the standard one in terms of tread pattern design, structure and compound. In Supersport the novelty is the rear solution U0775, a development of the standard SC1 which should ensure a more consistent behaviour. Magny-Cours VS tyres: the weather is the most important variable together with heavy downhill brakingfor the front The French circuit of Nevers Magny-Cours is preparing to host the Championship of the production derived series machines for the fourteenth time, which is also the thirteenth consecutive year. Built in 1960 by Jean Bernigaud, the track is located in the French countryside in Magny-Cours, near Nevers, in Burgundy, and has a very interesting layout because it offers some curves already present in other circuits such as Imola, Estoril, Adelaide and Nürburgring from which they take their name. It’s 4411 metres long, with nine left-handers and 11 right, with a finishing straight which measures 250 metres. The maximum slope uphill is 2.38%, while falling by 2.68% with a minimum bend radius of 5 metres, and maximum of 474.45 metres. Magny-Cours is a fascinating track that covers a hilly area and that, precisely because of its layout, makes it very difficult to overtake. It’s characterized by sudden deceleration and starts, interspersed with medium length straights. It also features a hairpin (Adelaide) with one of the heaviest braking points present among the international circuits, which riders arrive at from quite a fast straight. With regard to the quality of the asphalt, it is very smooth and almost free of irregularities, for this reason it does not create particular problems to the tyres except in the presence of heavy braking zones on steep gradients: in that case the front tyres, especially in soft compound, can be stressed, while those in hard compound featuring improved support in corner entry are therefore usually preferred. One aspect not closely related to the layout of the circuit but which can still affect the race is related to the weather; in this area of France and time of the year can be quite unpredictable. This can make more difficult the choice of the rear tyres. That’s why, in addition to rear solutions in soft compound Pirelli also brings solutions in SC1 compound. If, in fact, when weather conditions are stable and there are sufficiently high temperatures, a rear SC0 tyre would be the choice advisable to allow a level of optimum grip, With lower temperatures or with a wet surface it is good to resort to solutions more protected as the SC1 so as to obtain a good compromise between grip and resistance to tearing. And if it rains, Pirelli always has available intermediate and wet tyres and a new rear tyre for full rain conditions. The Pirelli solutions for the Superbike and Supersport classes: At Magny-Cours Pirelli brings a total of 4508 tyres to meet the needs of all riders of the different classes that are part of the eni FIM Superbike World Championship. As regards the Superbike class, each rider will have 72 tyres, 35 front and 37 rear- including slick, intermediate and wet solutions. In addition, only those riders who will enter the Superpole on Saturday will receive a rear supersoft qualifier tyre. To the front there are three slick solutions, two SC1 and one in SC2 compound. The first SC1 is the T1616, which debuted at Jerez but the riders were able to try it during the tests at Portimão in June. This solution, compared to the standard SC1, should further improve stability by limiting any phenomena of movement at high temperatures. The second SC1 solution available is the S1699 which debuted successfully at Aragón in 2014. It offers more support in the approach to bends in favour of a better steering precision and was the most widely used at the front during 2014. This development solution this year was brought to all rounds. The last option for the front is the standard SC2, optimal for high temperatures because it guarantees stability to the tread. This solution is that preferred by the aggressive riders and those who prefer the compactness of the tread band. At the rear two solutions in soft SC0 compound and one SC1. The standard SC0, is the soft solution ideal for tackling smooth asphalt and high temperatures. It offers maximum tread contact on smooth asphalt and maximum traction at high temperatures as well as higher resistance to thermal performance decay. It was brought for the first time to Thailand and was present also in Aragón, Assen, Imola, Donington, Portimão, Laguna Seca, Sepang and Jerez. As an alternative to the standard one the riders will use the T0611, a development solution in SC0 compound which debuted in Imola and has been brought also to Portimão, Misano, Laguna Seca and Sepang. It features a very soft compound that can offer a very high level of grip when used in high temperatures. The last solution available is the SC1 T1392, which successfully debuted this year at Aragón and was then brought to Assen, Imola, Donington, Portimão and Misano. It differs from the standard SC1 for a different construction system that guarantees a more consistent and constant behavior for the whole duration of the race. 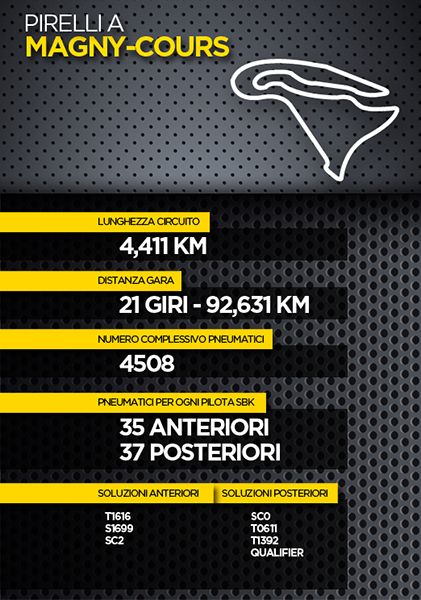 In Supersport, three front and two rear solutions, in addition to solutions for wet and rain. For the front there are two options in SC1 compound and one in SC2 compound. In addition to the standard SC1, ideal for demanding circuits, the development S1485 solution will be present. It made its debut at Misano in 2014 and in general this option ensures more support in the approach to bends in favour of a better steering precision. This year it was taken to Australia, Spain, Netherlands, Italy, Great Britain, Portugal, USA and Malaysia during the last round in Jerez. The third choice is that constituted by the standard SC2 in medium compound, suitable for aggressive riders and those who prefer the compactness of the tread band. At the rear there are two development solutions, one in SC0 compound and the other in SC1 compound. The SC0 is the U0442, which debuted at Misano and was taken at Sepang and in comparison to the standard one should offer more stability. The second option is the new SC1 development U0775, which differs from the standard SC1 for a different process of disposing the compound on the tread band, which should ensure greater consistency and more gradual wear. Except for the Superbike class using slick DIABLO™ Superbike tyres, all other classes use DIABLO™ Supercorsas. In the Supersport class 120/70-17 front and 180/60-17 rear with different compound solutions to which Pirelli can add development solutions over the year. In Superstock 1000 120/70-17 front in the confirmed SC2 compound while the 200/55-17 rear this year will be the SC1 compound. For the Superstock 600 class as in the past the tyres will be available to riders in 120/70-17 SC1 front compound and 180/60-17 in SC2 rear compound. The 2014 Pirelli statistics for Magny-Cours: • Total number of tyres Pirelli brought: 5072 • Number of solutions (dry, intermediate and wet) for the Superbike class: 5 front and 8 rear • Number of tyres available for each Superbike rider: 34 front and 38 rear • Number of solutions for the Supersport class (dry, intermediate and wet): 5 front and 5 rear • Number of tyres available for each Supersport rider: 26 front and 26 rear • Superbike Best Lap Awards won by: Marco Melandri (Aprilia Racing Team), 1'54.013  (Race 1, 11th lap) and by Sylvain Guintoli (Aprilia Racing Team), 1'53.660 (Race 2, 10th lap) • Supersport Best Lap Award won by: Kenan Sofuoglu (San Carlo Puccetti Racing), 1'56.887 (7th lap) • Temperature in Race 1: air 14° C, asphalt 13° C • Temperature in Race 2: air 14° C, asphalt 16° C • Maximum race speed reached by Pirelli DIABLO™ Superbike tyres: 268 kms/h, in Race 1 by Jonathan Rea (Pata Honda World Superbike Team) at 14th lap • Maximum race speed reached by Pirelli DIABLO™ Supercorsa tyres in Supersport: 251,7 kms/h, Jules Cluzel (MV Agusta Reparto Corse) at 5th, 6th and 7th lap.

The eni FIM Superbike World Championship arrives at the penultimate round: Pirelli at Magny-Cours to continue development with an eye to 2016
Newsroom