The FIM MX World Championship Starts in the Pirelli Way A historical opening race in the FIM Motocross World Championship went true to the form book as Qatar hosted the first meeting under floodlights and was the first to involve the new Superfinal format; an idea being considered for fulltime implementation in 2014 that sees both classes mixed for the second moto. Across the dirt of the new course built within the automobile track, Pirelli immediately took control of the premier MX1 category after a battle between two of the chief protagonists from the 2012 campaign who are heavily expected to tussle again over the coming six months. 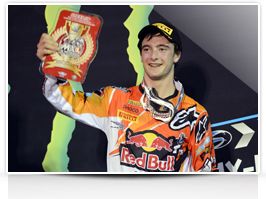 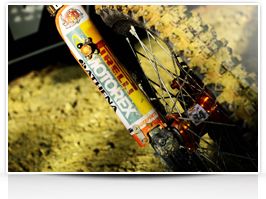 Thanks to his superior overall placement that involved victory in the first moto and a runner-up slot in the Superfinal works Suzuki rider Clement Desalle heads the early championship standings over Antonio Cairoli, who was restricted by a bad start in the opening sprint and could only fly back to third. The reigning champion aced the Superfinal ahead of Desalle however. Pirelli was also prominent at the front of the classification thanks to Ken De Dycker (4th), Tommy Searle (6th), Kevin Strijbos (7th), Steven Frossard (9th) and Shaun Simpson (10th). The Pirelli Scorpion MX MidSoft 32F front and MidSoft 32 rear were used by all of the Pirelli camp for the terrain that mixed soft and very rough sections with those of hard-pack and were created by 3500 trucks of Saudi Arabian soil. In MX2 defending champion Jeffrey Herlings was easily victorious in both affairs despite adversity through a small knee injury picked up several days before hand. He beat the surprising figures of Yamaha Monster Energy’s Dean Ferris who picked up fifth place and second spot for his first podium visit. Also Pirelli mounted was Glenn Coldenhoff, 4th overall in front of Christophe Charlier and Jordi Tixier. The next round will take place on the 10th March at Pattaya (Thailand). MX1 Overall Classification: