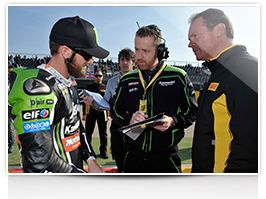 Kawasaki dominates in all the classes with a Sykes-Baz one two in Superbike and a new track record for the Englishman who, using the rear SC1 tyre reserved only for Superbike riders, improved on his own record set last year by 3 tenths The weekend that just came to an end at the MotorLand Aragón track for the second round of the eni FIM World Superbike Championship was a positive one for Pirelli. This was the first weekend that Pirelli provided a supply of DIABLO™ Superbike rear tyres that were different for the Superbike and EVO riders: with the same number of solutions available, all the riders had 3 in common, whereas the fourth was a solution dedicated respectively to each of the two classes. Both the début of the tyre developed for EVO riders in a soft compound and the one developed for Superbike riders in a medium compound demonstrated excellent performance, confirming that Pirelli's developments over the last few months have been effective in both cases and for the bikes in both categories. This was definitely a Kawasaki green weekend. In Superbike the duo of Tom Sykes and Loris Baz (Kawasaki Racing Team) took a fantastic one-two win in both races with the Englishman on the top step of the podium and the Frenchman on the second step. Crossing the line behind them were respectively Jonathan Rea (PATA Honda World Superbike) in Race 1 and Marco Melandri (Aprilia Racing Team) in Race 2. In Supersport it was Kawasaki green again, this time with the ZX-6R dominating, thanks to the first place that Turkish rider Kenan Sofuoglu (MAHI Racing Team India) took home, followed by Michael VD Mark (PATA Honda World Supersport) and Frenchman Florian Marino (Kawasaki Intermoto Ponyexpres). In the Superstock 1000 FIM Cup the Barni Racing Team had the satisfaction of taking the top step of the podium with Leandro Mercado, the 22 year old Argentinian rider who basically ran the race by himself, followed over the finish line by Lorenzo Savadori (Team Pedercini) and Kyle Smith (Agro-On Wil Racedays). Also noteworthy were the efforts by Marco Faccani who, also astride a Kawasaki ZX-6R for the San Carlo Team Italia, won the Superstock 600 FIM European Championship race in his début, finishing in front of team mate Andrea Tucci and Dutchman Wayne Tessels (Waynes Racing Team). 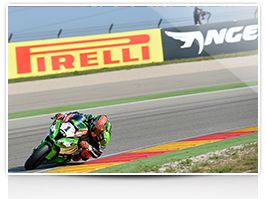 Comment from Giorgio Barbier, Pirelli Moto Racing Director: “The work done throughout the weekend with teams and riders was very positive and profitable, so we are most definitely satisfied. Both the new SC0 tyre reserved for only the EVO riders and the special SC1 solution which was exclusively for the Superbike riders performed their tasks superbly and were used and quite popular among the riders, confirming that we are working in the right direction. I would like to point out how, despite what others may think, our efforts during the year will not be focused solely on developing tailor made solutions for the EVO class. Here at Aragón, for example, the Superbike riders also had a new SC1 development solution that performed very well and was quite well liked. Our goal is still the one we stated at the beginning of the year: to place all the riders in both categories in the best possible racing conditions, providing them with better and better performing tyres which will adapt well to bikes from all the manufacturers. Speaking of this, Bimota's début, competitive straight away and one of the fastest in the EVO class, is confirmation of just how easy it is for the riders to be confident straight away with our tyres. This was definitely a positive weekend for the Akashi-based manufacturer and I would like to compliment them on their excellent work and the results they achieved in all the categories. Now we are already looking to the future and the upcoming rounds. We will be developing other solutions for the top class, both for Superbike and EVO, as well as for only one of these categories. I am certain that the championship has many pleasant surprises in store for us.” The Pirelli solutions chosen by the riders: At MotorLand Aragón the Superbike and EVO riders were for the most part oriented toward 3 solutions. On the front both the Superbike and EVO riders opted almost unanimously for the new SC1 development solution (S1699) which was deemed more precise and better performing on this track with respect to the standard SC1. For the rear the tailor made solutions prevailed for the Superbike and EVO categories, respectively the SC1 development solution (S1185) which was especially chosen by most of the Superbike riders on the grid in race 1, and the SC0 R1120 development solution which was the preferred option on the other hand among the EVO riders. With the higher temperatures in Race 2 various Superbike riders opted for the standard SC0 solution, whereas the EVO riders confirmed their preference for the solution which had been developed ad hoc for them. In Supersport almost all the riders chose the standard SC1 solution for the front and the choice was similarly unanimous for the rear where basically everyone leaned toward the new SC1 development solution (S624), an alternative to the standard SC1, compared to which it proved to be sturdier and to provide more grip. 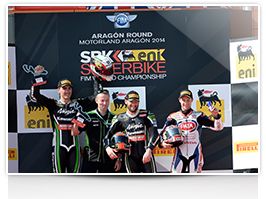