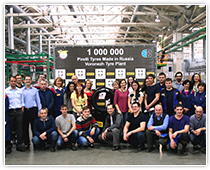 Last April the Voronezh Tyre Plant produced its millionth Pirelli branded tyre. A few minutes earlier the Pirelli tyre number 999,999 left the final operations area at the Kirov Tyre Plant. The joint efforts of the two plants made it possible to produce one million Pirelli tyres in Russia since November 2012. The Voronezh and Kirov teams celebrated this event by taking a group photo with the jubilee tyres. A large-scale modernization started immediately after the Voronezh Tyre Plant and the Kirov Tyre Plant joined Pirelli family. The production processes of both plants were upgraded and logistics and quality control processes were reviewed in order to ensure that the production was aligned with Pirelli’s high standards. In 2014 the Kirov Tyre Plant is targeted to produce six million tyres. A new compound shop construction, modernisation of all the production areas and new lab and testing equipment made it possible to produce high quality Pirelli tyres, including the Green Performance line. 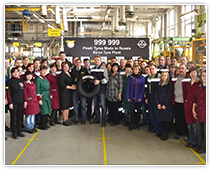