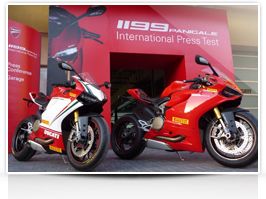 The 195 HP produced by the red fury from Borgo Panigale will hit the ground through the brand new, original equipment Pirelli Diablo Supercorsa SP tyres in 120/70 ZR17 for the front and the fresh new 200/55 ZR17 for the rear. They will also be used starting this year by Superstock 1000 FIM Cup riders in the SC compound version Multiple world Superbike champion Troy Bayliss had this to say after testing them on the Yas Marina circuit in Abu Dhabi: “Simply excellent tyres. I know Pirelli quality well, but this time they've managed to astonish me. Good job, Pirelli" Abu Dhabi Yas Marina circuit: 440 brand new Pirelli Diablo Supercorsa tyres ready to devour the asphalt along with 28 Ducati 1199 Panigale bikes. Following the introduction of the new P Zero tyres at the end of January for the 2012 Formula 1™ season, just a few weeks later the boys from Pirelli return to the Yas Marina circuit in the United Arab Emirates capital, this time in support of the press launch for the new supersport Ducati, the 1199 Panigale, which will soon be available on the market with the new Pirelli Diablo Supercorsa SP (Sport Production) tyres as original equipment. The newest member of the Diablo family, introduced for the first time at EICMA 2011 in the first flagship Store Pzero Moda which opened last September in Milan, will shoe the Italian red fury in sizes of 120/70 ZR17 for the front and 200/55 ZR17 for the rear. They will also be exclusively used starting this year in the SC compound (Special Compound) version by Superstock 1000 FIM Cup riders. 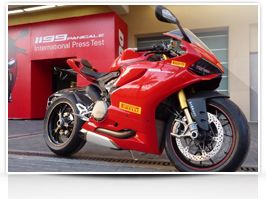 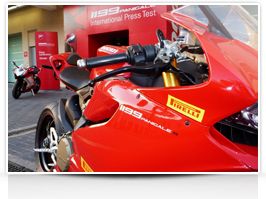 There were two top notch testers at 1199 Panigale press launch going on this week: three time World Superbike Champion Troy Bayliss and Ducati Vehicle Technical Director Andrea Forni, both of whom were able to test the performance of the Diablo Supercorsa tyres in the race replica SP version, also adapted for daily street use, and the SC compound version which will be used this year by all the Superstock 1000 FIM Cup riders. Together with Pirelli riders and other Ducati testers, the two Ducati gurus rode lap after lap, fully enjoying the spectacular performance of the Diablo Supercorsa shod Panigale. "Simply excellent tyres", said the enthusiastic Australian who won the World Superbike Championship riding the bikes from the Borgo Panigale based manufacturer in 2001, 2006 and 2008."If the SP version won me over with the fluid neutrality that accompanies each manoeuvre, even the most extreme ones, the SC2 compound version brought me back to an absolute total racing feel. I know Pirelli quality well, but this time they've managed to astonish me. Good job, Pirelli!" A much appreciated feature is the extraordinary capacity to attack curves in braking with extreme neutrality until reaching the apex, guaranteeing grip and an absolute level of stability in the subsequent acceleration phases. These are characteristics which Troy Bayliss skilfully took advantage of in spectacular test runs on both the standard version of the bike shod with Diablo Supercorsa SP and on the Kit bike with the SC2 version. And engineer Forni's opinion confirms Bayliss' comments: "The new Diablo Supercorsa SP tyres in this 200/55 version are without a doubt the best street legal racing tyres in the world at the moment and I must say the best that I have ever had the opportunity to test in my career". Pirelli decided to introduce this new tyre gradually into the top racing world with only the SC2 compound version which will be used in Superstock 1000 FIM Cup starting this year and only in sizes 120/70 ZR17 for the front and 200/55 ZR17 for the rear as standard original equipment on the 1199 Panigale and already available on the market as a replacement tyre. At the beginning of 2013 Pirelli will expand the SP street range with 180/55, 190/50 and 190/55 sizes for the rear and will make the SC0 and SC1 compounds available for the SC version as well as 150/60, 160/60, 180/55, 180/60, 190/55 sizes for the rear and 110/70 for the front in order to extend use of the new tyre to national championships. 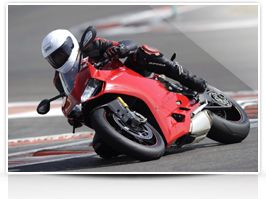 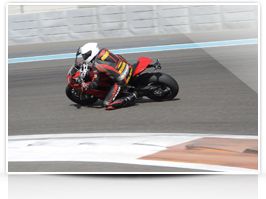