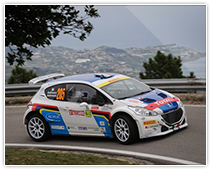 “Il Re del Targa” – the King of the Targa – has thanked Pirelli after a record eighth win on the Targa Florio. The multiple Italian champion Paolo Andreucci, co-driven as always by Anna Andreussi, competed in Sicily in his Pirelli P Zero-shod Peugeot Italia 208T16. The event, based in Campofelice di Roccella, west of the Sicilian capital Palermo, consists of 16 all-asphalt stages over a competitive distance of 162.25 kilometres. It’s one of the oldest competitons in world motorsport, having first run as a road race in 1906. Now run as a modern rally, forming round three of the Italian Rally Championship, Andreucci led from start to finish over the 16 all-asphalt stages. For the first time, he used Pirelli’s new RX7B tyre in warm conditions. The soft-compound tyre originally designed for cool conditions - having already shown plenty of pace to finish on the podium at the season-opening Rally del Ciocco in March -, showed itself to be equally competitive in the hot and slippery conditions of Sicily, with asphalt temperatures around 40 degrees centigrade. The effectiveness of the RX7B Pirelli tyre was also proved by Sicilian privateer Andrea Nucita. On the final afternoon he defeated the 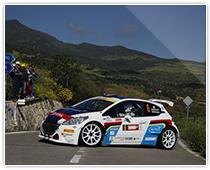 factory Skoda Fabia S2000 of reigning champion Umberto Scandola, to finish on the podium in a privately-run Peugeot 207 S2000. Pirelli was also successful in the Junior category, with Stefano Albertini in a Peugeot 208 R2 finishing seventh overall. The historic section was dominated by Pirelli as well, thanks to Lancia 037 driver Massimo Pedretti and the P7 Corsa Classic tyre.