For the first true comparison with the 16.5 inch tyres the new 17 inch Diablo Superbike confirms the excellent performance already displayed at Phillip island, lowering the race fast laps by 3 tenths of a second compared to last year Pirelli confirms the progress made with the new 17 inch tyres at the first European round on the Spanish Motorland Aragón circuit. In fact, the new 17 inch Diablo Superbike tyres led to an improvement by 3 tenths of a second on the fast lap made in race 1 and race 2 compared to last year. 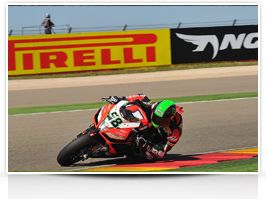 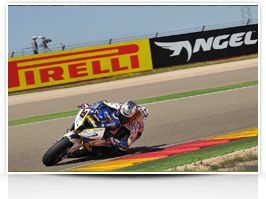 In particular the solution used the most on the rear was precisely the Standard SC1 (R828), chosen by all the riders in both races. The BMW Motorrad GoldBet SBK and Aprilia Racing Team riders worked very well throughout the weekend, managing to take full advantage of the Pirelli Diablo Superbike tyres as demonstrated by the fantastic double win by Chaz Davies (BMW Motorrad GoldBet SBK), riding to the top step of the podium for both races, and by Sylvain Guintoli (Aprilia Racing Team) who took second place in both race 1 and race 2. Excellent third place finishes went to Marco Melandri (BMW Motorrad GoldBet SBK) in race 1 and Tom Sykes (Kawasaki Racing Team) in race 2. In Supersport the top step of the podium went to Fabien Foret (MAHI Racing Team India) followed by Michael Vd Mark (Pata Honda World Supersport) and Italian rider Luca Scassa (Kawasaki Intermoto Ponyexpres). The lower Superstock classes also had a perfect début with wins going to Sylvain Barrier (BMW Motorrad GoldBet STK) in the 1000 class and Gauthier Duwelz (MTM Racing Team) in 600. Last but not least, the Honda European Junior Cup, which had 34 riders on the starting grid, all fitted with Diablo Supercorsa SC1 compound tyres, crowned Jake Lewis (Jake Lewis Racing) for the first round of the season. 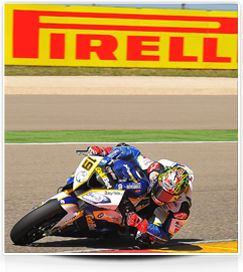 The Pirelli solutions chosen by the riders: For the first round of the 2013 season disputed on Spanish soil (the second will be held in October at the Jerez de la Frontera circuit) Pirelli provided the Superbike and Supersport riders various solutions including the standard SC1 and SC2 compounds and some solutions specifically designed for this circuit. For the rear in Superbike the Standard SC1 solution (R828) was chosen by all 19 riders lined up on the starting grid in both race 1 and race 2. This slick tyre provides medium compound hardness that falls halfway between the soft and hard solution. This is the most eclectic solution and for this reason it is generally able to cover about 80% of the World Superbike Championship races. The fact that it was used in both race 1 and race 2 demonstrates this, with an asphalt temperature respectively of 26 and 42 degrees Centigrade. For the front, on the other hand, about half the riders opted for the SC2 solution (R982), a medium hardness blend already used in the Phillip Island round, which is excellent for high external temperatures because it ensures the solidity of the tread band. This is the solution usually favoured by riders with a more aggressive style who prefer a compact tread band. In Supersport the standard SC1 solution (R303) of the Diablo Supercorsa was also the one used by most riders on the front and for the rear as well (P1177). 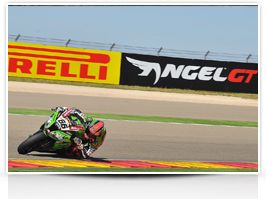 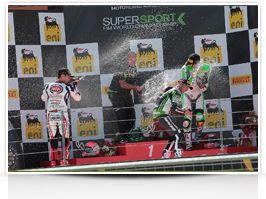 Pirelli Best Lap Award: For the Motorland Aragón round the “Pirelli Best Lap Awards” were also assigned, the three awards Pirelli assigns to the riders who have put the fastest lap in Superbike race 1 and race 2 and in Supersport race. The winning riders received recognition, which this year is a trophy in the shape of a motorcycle dashboard which displays the best time made, presented in the paddock during the press conference following the podium ceremonies at the end of Superbike race 1 and race 2 as well as at the end of the Supersport race. The Superbike and Supersport rider who has received the most “Pirelli Best Lap Awards” at the end of the season will be named the “Best Lap Winner: fastest rider of the year” and will be awarded during the traditional end of year ceremony. 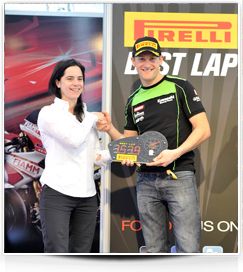 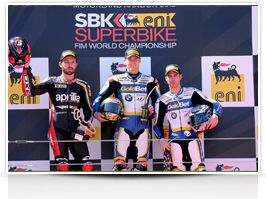 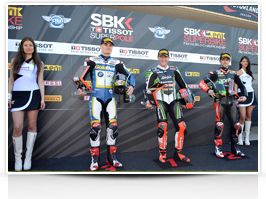 Comment from Giorgio Barbier, Pirelli Moto Racing Director: “The weekend that just ended was very enjoyable, both due to the particularly pleasant temperatures we had and, above all, because of the results and confirmations we were able to achieve. This was the first true comparison between the old 16.5 inch tyres and the new 17's. In fact, at Phillip Island the asphalt was new and that kept us from making an accurate comparison. It was precisely here at Motorland Aragón last year where the Superbike riders had tested the new tyres for the first time ever, predicting excellent results for the future, and this is effectively what has happened. This was also the début for the Superstock and the European Junior Cup classes. We can definitely confirm that the tyres performed very well in all categories. The fact the all the Superbike riders chose the standard SC1 compound solution cannot help but please use because that confirms the work our Research and Development department has done to create an extremely "multi-use" tyre capable of adapting to different bikes, various tracks and different operating temperatures in a highly respectable way. We will likely see it quite often throughout the rest of the season. I would like to congratulate Chaz Davies and the BMW Motorrad GoldBet SBK team for their fantastic double placing, but also Sylvain Guintoli and the Aprilia Racing Team for the two excellent second place finishes. Fabien Foret and the MAHI Racing Team India also did an excellent job in Supersport as well as the Superstock and European Junior Cup riders in their opening round. I am convinced that 2013 will also reward us with an exciting championship with no lack of surprises”. The 2013 Pirelli statistics for the Motorland Aragón round: • Total number of tyres Pirelli brought: 4707 • Number of solutions (dry, intermediate and wet) for the Superbike class: 5 front and 6 rear • Number of solutions for the Supersport class (dry, intermediate and wet): 4 front and 5 rear Number of tyres available for each Superbike rider: 33 front and 36 rear • Number of tyres available for each Supersport rider: 24 front and 28 rear • Temperature in Race 1: air 18° C, asphalt 26° C • Temperature in Race 2: air 27° C, asphalt 42° C • Maximum race speed reached by Pirelli Diablo Superbike tyres: 328.9 km/h, Marco Melandri (BMW Motorrad GoldBet SBK) and Sylvain Guintoli (Aprilia Racing Team) in Race 1 respectively at 2nd and 14th lap • Maximum race speed reached by Pirelli Diablo Supercorsa tyres in Supersport: 285 km/h, Florian Marino (Kawasaki Intermoto Ponyexpres), 5th lap