The Northern Irishman celebrates his 200th race in the factory derivatives World Championship in style, in WorldSSP success for Sofuoglu and in WorldSSP300 the win goes to Deroue, whereas in the Super

Assen (The Netherlands), 30 April 2017 – After the race yesterday, Jonathan Rea and Tom Sykes (Kawasaki Racing Team) took home a splendid one-two again today in WorldSBK for the Akashi-based manufacturer to close out a fantastic weekend on the Dutch Assen track, taking a splendid four of a kind of victories, winning in all four classes of the MOTUL FIM World Superbike Championship. It was success for Turkish rider Kenan Sofuoglu (Kawasaki Puccetti Racing) in the FIM Supersport World Championship race and Dutchman Scott Deroue (MTM HS Kawasaki) in the new FIM Supersport 300 World Championship entry level class Kawasaki did not pull any punches in the FIM Superstock1000 European Championship either, where another Turkish rider, this time Toprak Razgatlioglu (Kawasaki Puccetti Racing), achieved his first success of the season to round out the collection of Kawasaki victories. In Race 2 of the MOTUL FIM World Superbike Championship, the two-time World Champion once again confirmed his intentions to place his seal on the Championship as soon as possible, having already won seven of the eight races held. This was also a great way for Rea to celebrate his 200th race in the factory derivatives World Championship. The Kawasaki Racing Team rider demonstrated a cool head and excellent performance throughout the weekend and only his teammate, Tom Sykes and Ducati rider Chaz Davies were able to put any kind of pressure on him. The outcome of the weekend is definitely positive for Pirelli as well. In particular, on Sunday some important feedback arrived from the standard solutions, in other words, those tyres that are sold routinely on the market and that can be purchased by bikers all over the world. In WorldSBK, the SC3 option for the front, the hardest in the DIABLO™ Superbike range, was the most used in Race 2, whereas on the rear it was the standard SC0 that set the pace. The standard tyre solutions triumphed in WorldSSP as well, where the SC1 medium solution was the most popular both on the front and the rear. This goes to show the excellent level achieved by the tyres that make up the selection of standard solutions.

Race 2 unfortunately lost one of the protagonists of Race 1, Marco Melandri, who was forced to withdraw in the ninth lap due to a crash. In the meantime, Jonathan Rea (Kawasaki Racing Team) who, in accordance with the rules, started from the ninth spot on the grid after winning Race 1, did not take long to climb his way back to the front and as early as the third lap, he had already moved into the lead. From the fifth lap on, his teammate Tom Sykes had caught up with him, staying glued to his rear tyre for the entire race all the way to his last ditch attempt at a pass right on the last corner before the chequered flag. It was an attempt in vain to overtake the two-time World Champion, who managed to cross the line first with an advantage of 25 thousandths over Sykes. Behind them, on the third step of the podium, it was Chaz Davies (Aruba.it Racing – Ducati) who, despite an excellent performance, was never able to get into the mix and be a true danger to the team Kawasaki riders.

The Pirelli solutions chosen by the riders for WorldSBK Race 2 and WorldSSP: In Race 2 of WorldSBK, thanks in part to asphalt temperatures that were almost 10° C than in Race 1, the number or riders selecting a soft rear tyre went up and, at the same time, preferences for the hardest solution in the range on the front increased. On the front, the standard SC3 (option E) was selected by 13 of the 21 riders on the grid. The preferences of the other riders were more or less equally divided between the remaining four solutions available. Using the standard SC3 were, among others, Forés, Ramos, Laverty, Mercado, Melandri, Sykes, Davies and Van Der Mark, as well as his teammate, Lowes. On the other hand, opting for the V0952 SC1 development solution (option C) was the defending World Champion. As for the rear, 13 riders used the standard SC0 (option A), in other words, the softest solution, whereas the others chose one of the two available SC1 development solutions. 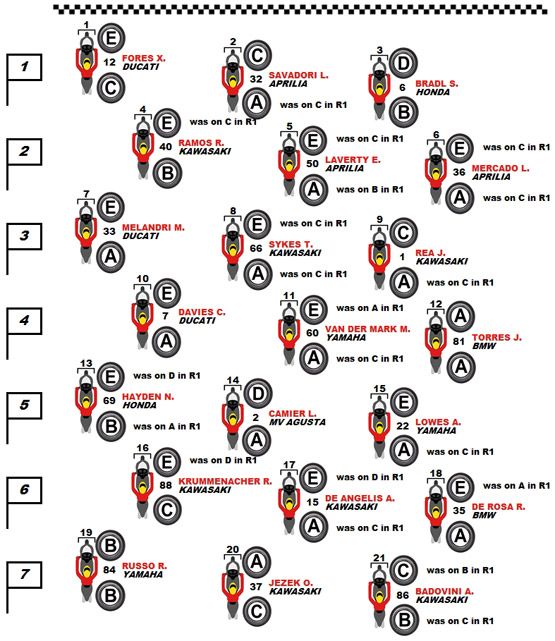 Tyres selected on the starting grid of the WorldSSP Race

The Northern Irishman celebrates his 200th race in the factory derivatives World Championship in style, in WorldSSP success for Sofuoglu and in WorldSSP300 the win goes to Deroue, whereas in the Super
Newsroom