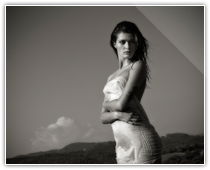 The 2012 edition of The Cal™ has been entrusted to Mario Sorrenti, the first Italian photographer to contribute to the history of what has become a true cult object. Following Mythology by Karl Lagerfeld we have Swoon, i.e. ecstasy captured by images. Neapolitan by birth and New Yorker by adoption, Sorrenti chose Corsica and the rugged landscape of Murtoli a short distance from Bonifacio for the shooting of the famous Pirelli Calender. The 25 pictures - 18 black and white and 7 colour - are presented in a refined, canvas-lined portfolio, a format that has never been used before. 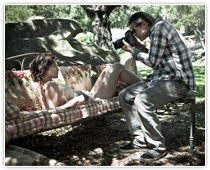 There are twelve stars of this edition: nine models and three actresses. The models are: the Brazilian Isabeli Fontana, the Russian Natasha Poly, the Dutch Saskia de Brauw and Lara Stone, the Americans Joan Small and Guinevere Van Seenus, the Polish Malgosia, the Lithuanian Edita Vilkeviciute and Briton Kate Moss. The actresses are the Ukrainian Milla Jovovich, the Italian Margareth Madè and the Japanese Rinko Kikuchi. «In “Swoon”, I put the bodies in direct contact with nature, which harbours them as if they were its extension, in a set of images where rocks, land, tree trunks, sky and sea are all turned into a backdrop for the bodies», explains Mario Sorrenti, an artist whose fame was built on his extraordinary skill with nudes.