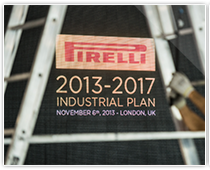 The Pirelli Industrial Plan 2013-2017 focuses once again on the Premium sector with planned investments of 1.6 billion euro. Pirelli had identified already in 2011 the Premium sector as the most dynamic segment, consolidating its partnerships with leading car manufacturers. The Premium segment currently represents over 53% of business car revenues and over 80% of profitability, an  increase of 7% for both earnings and profitability compared to just two years ago. Thanks to new investments, the overall capacity of the consumer business will increase from the current 69 million units to 81 million in 2017, with the Premium segment expected to rise from the current 48% to 63%. The Premium strategy will be based on the use of OEM pull-through, on targeted marketing activities and on a programme of retail network integration focusing on the consumer. The programme is expected to increase from the current 6,000 units to 9500 units by 2016, with a sales target of 50% in the Premium segment. Over the course of the Industrial Plan, Pirelli intends to reduce volumes and capacity in the Standard segment and to increase the profitability of the Medium segment in order to meet the demand of Premium car manufacturers and of the retail network worldwide, even in those areas, such as Brazil, where the non-premium segment is still predominant. For examples, Runflat and Winter versions are to be extended also to the non-premium segment, improving the competitiveness and profitability of the Medium sector. In order to achieve these goals, Pirelli will focus on research and development. In the Car sector it is to develop 14 new lines: 6 for OEM and 8 for the aftermarket. Six lines will include niche products (Runflat, Seal Inside and Noise Reduction). Further technological innovation, such as the Pirelli Noise Cancelling System and new materials and geometric shapes designed to reduce rolling resistance up to 20% by 2017, will be introduced. In the Motorcycle sector, thanks to the launch of 10 new tyres, Pirelli aims at consolidating its technological leadership with products offering increasingly higher performance. In particular, a new line of radials for 250-350 cc engines is to be developed for the LATAM market, while the Metzeler Custom Touring line will be launched in North America. Finally, in the Truck sector, Pirelli is to launch 11 new tyres: the new Regional tyre, featuring improved mileage and retread technology, Highway and City tyres and the completion of extreme winter tyre range. The company will also be concentrating on the development of retread technology and customer service through the CyberFleet™.