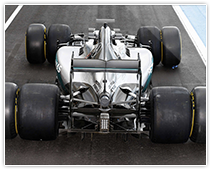 The 2016 titles are already close to being wrapped up and FORMULA 1 is already looking at the next year and at the wider Pirelli tyres that are going to make their race debuts in Australia at the end of March. The FIA World Council, which met during the week before the Malaysian Grand Prix, announced that for the first five races of 2017 each driver will have exactly the same tyre allocation: two sets of the hardest compound available, four sets of the medium compound available and seven sets of the softest compound available. The first five grand prix of 2017 (from Australia on March 26 to Spain on May 14) will take place too close to the date when the teams will have to choose their tyres for each race, according the current regulations. Pirelli is introducing wider rubber next year. The front tyres will go from the current 245mm width up to 305mm, while the rear tyres grow from 325mm to 405mm. In total, this means the tyres are 25% wider. Enormous leaps which Pirelli has undertaken since August with three teams (Mercedes, Ferrari and Red Bull) via a dedicated tyre test programme that will conclude in Abu Dhabi on 29 November: two days after the final grand prix of the season. A busy winter of analysis, optimisation and refinement will take place, aiming to define the final specification that will take to the track at the first official test around three months later.