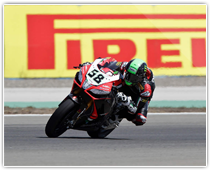 After an exciting summer, the Eni FIM Superbike World Championship now enters the final part of the season with just three rounds to go before the 2013 champion can be crowned. At Imola, Tom Sykes scored a double on his Kawasaki fitted with a Pirelli Diablo Superbike SC0 rear and SC2 front, breaking the track record and recording the fastest lap. The Superbike overall standings are an increasingly close-run affair with the lead continuing to alternate between several riders, including, in addition to Sykes, Aprilia Racing Team teammates Sylvain Guintoli and Eugene Laverty and BMW’s Italian rider Marco Melandri. Following last year’s debut, Pirelli returned to the Moscow Raceway in order to get the second half of the championship underway with the eighth of the 15 rounds scheduled for 2013. But it was at Silverstone, over the first weekend of August, that the overall standings were reshuffled still further with wins for the British and French riders, the most adept at exploiting the new Diablo Superbike SC1 development compound to the full. On 1st September at the Nürburgring, BMW bossed proceedings on home ground thanks to the performance of Chaz Davies and Marco Melandri, but by winning race 1, Sykes regained the overall lead in the championship, overtaking the Aprilia rider Sylvain Guintoli by a single point. 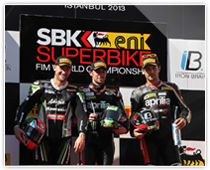 This brings us to the 11th round in Turkey at the Intercity Istanbul Park circuit and Laverty’s double. The tyres that Pirelli developed in order to combat the perils of the Turkish circuit gave an excellent account of themselves. After this round, Sykes still leads the overall standings with 323 points, followed by the Frenchman Guintoli on 315, with teammate Laverty and Melandri not far behind on 297 and 290 points respectively.