The two-wheel challenges for the season 2017 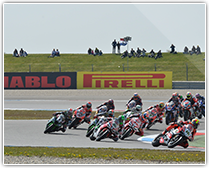 In 2017 Pirelli plays again a leading role in the most important two-wheel national and international competitions, taking part in an impressive 119 motorcycling championships over 5 continents. There will be no lack of product innovation, starting with the tyres made specifically for use in track competition. Most significant of all is the new Superpole® tyre, introduced at Aragón, the first European round of the MOTUL FIM Superbike World Championship season, where Pirelli has been the sole tyre supplier for all classes uninterrupted since 2004. Compared to the past seasons, when the qualifier tyre was only able to guarantee one single timed lap, the most important feature of the new Pirelli tyre is its ability to provide the riders with a minimum of 2 and up to a maximum of 4 timed laps, depending on track characteristics. Pirelli has also decided to promote several slick development solutions to new standard solutions for 2017. DIABLO™ Superbike has new rear solutions and a new front standard SC1 compound, not only available to riders competing in WSB and to all the riders taking part in national championships, but also to any racers in the world. Starting from this year, DIABLO™ Superbike, used in the top class, and the DIABLO™ Supercorsa SC, used in the Supersport and Superstock 1000 categories, are also available to the FIM Supersport 300 World Championship, the newborn racing class for small engine motorcycles, which are actually becoming the new entry level for the motorcycling enthusiast into the world of supersport bikes. 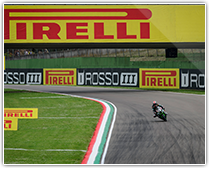 Pirelli’s commitment has been re-confirmed also in off-road competition, starting with the FIM Motocross World Championship, where the SCORPION™ MX family has been undergoing a slight restyling and repositioning process. As for the front tyre, the riders will have the chance to choose between SCORPION™ MX32™ in Mid Soft or Mid Hard compounds, whereas there will be 4 different compounds for the rear: in addition to SCORPION™ MX32™ in Mid Soft or Mid Hard compounds, SCORPION™ MX Soft and SCORPION™ MX Hard will also be available. Lastly, Pirelli participates in several other competitions at a national level. First of all, the MCE British Superbike Championship, which Pirelli has been supporting as Presenting Sponsor and Sole Tyre Supplier for all classes until 2020. In addition to this, Pirelli has also confirmed its important position in the German National Championship, France Superbike FSBK (French National Championship), CIV (Italian Speed Championship), Superbike Series Brazil, in Malaysia and Philippines with the Superbike Series and in many other national championships.

The two-wheel challenges for the season 2017
Newsroom