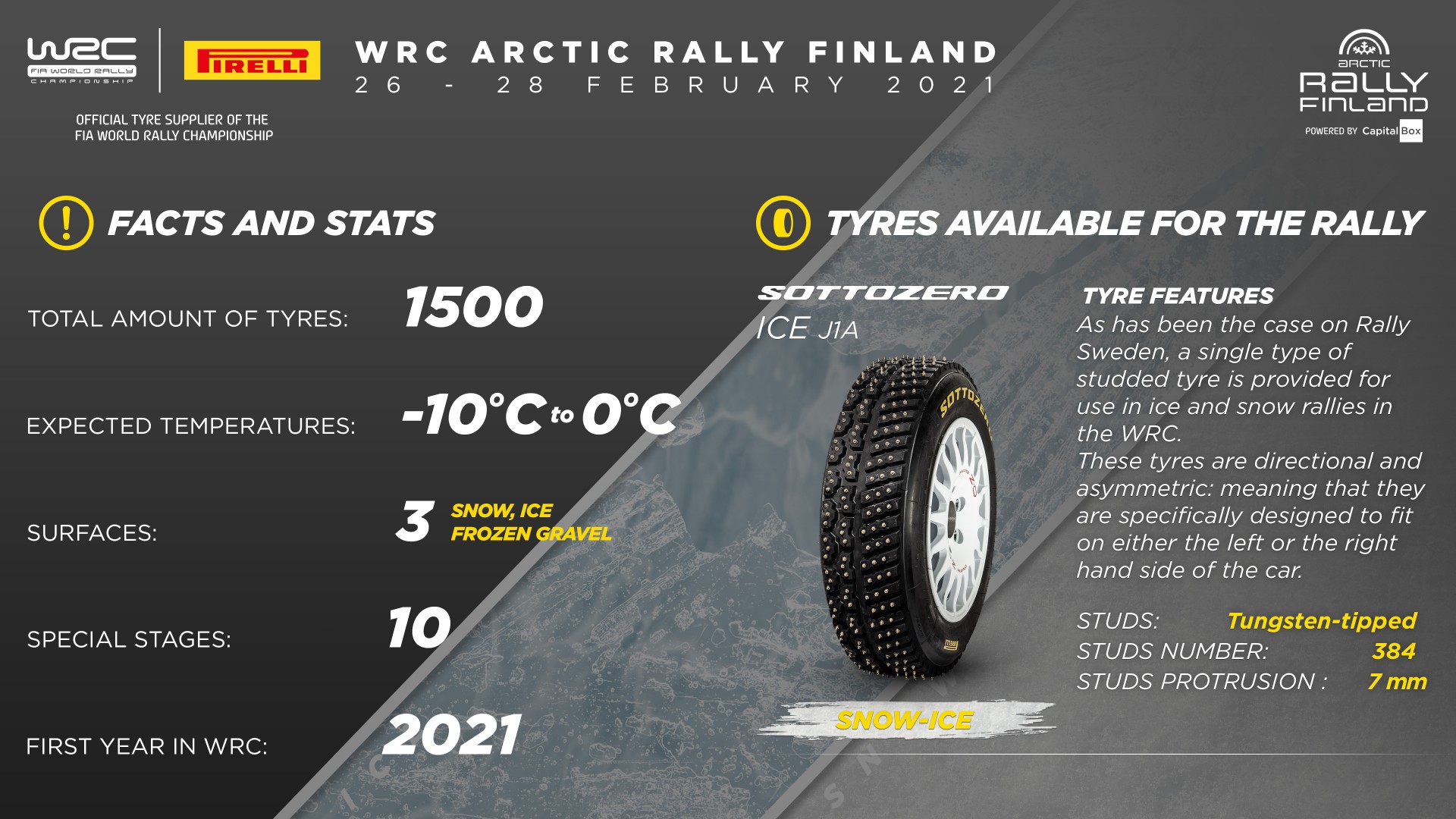 Milan, February 22, 2021 – Following a successful return as exclusive tyre supplier to the FIA World Rally Championship last month, Pirelli now heads to the Arctic Rally Finland. Taking the place of the cancelled Rally Sweden this year as the WRC’s only pure winter event, it is based upon the Arctic Lapland Rally which runs every January as part of the Finnish championship, centred around Rovaniemi with stages held inside the Arctic Circle.

The Pirelli tyres in Finland

Sottozero Ice J1: As has been the case on Rally Sweden, a single type of studded tyre is provided for use in ice and snow rallies in the WRC. Pirelli’s Sottozero tyre features a total of 384 tungsten-tipped studs, each one protruding seven millimetres out from the tread blocks. The rest of the stud is locked into place during the vulcanisation process rather than being inserted afterwards – technology used only by Pirelli which ensures stud retention. These tyres are directional and asymmetric: meaning that they are specifically designed to fit on either the left or the right hand side of the car.

Terenzio Testoni, rally activity manager: “The seven-millimetre stud provides the best compromise between grip in ice and deep snow during the first run over the stages, and stud retention during the second run. The teams have tested for a total of 15 days between them, using around 250 tyres, and we’re pleased with the performance and levels of stud retention seen so far.”

Pirelli will bring around 1500 tyres to Arctic Rally Finland. Of these, 350 are for the top class of World Rally Cars.

Each of the 13 WRC drivers can use up to 20 tyres during the rally itself, with a separate allocation of four tyres for shakedown.

Pirelli is set to supply 1150 other four-wheel drive cars, including those in WRC 2 and WRC 3.

Pirelli will have 22 staff present on the rally including fitters and engineers.

The big number: 31. The rally will begin on Friday afternoon with the longest stage of the rally – the 31.05 kilometres of Sarriojärvi. The same stage will then be repeated after sunset.

Unlike on Rallye Monte-Carlo, there are no tyre choices as such for the drivers to worry about, with just the one type of tyre available. But drivers will still need to think carefully about how they use their tyres over a loop of stages – especially with all the tests being 20 kilometres or more in length.

Young guns. Arctic Rally Finland a bonus home event for Toyota driver Kalle Rovanperä, and the 20-year-old has past experience of rallying in Lapland. Sweden’s Oliver Solberg meanwhile will make his WRC1 debut in a Hyundai, aged 19. Both youngsters grew up learning to drive on snow and ice alongside their respective fathers, former WRC stars Harri Rovanperä and Petter Solberg.

Valtteri Bottas: “The stages here are unreal: you have to see them to appreciate how beautiful it is. I tried some new ice tyres from Pirelli in January and they were very impressive: big improvement on braking performance and traction. High speed and durability was also good. I enjoyed it a lot!”