Three victories for Pirelli in the early Motocross rounds 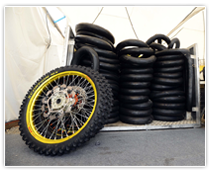 Pirelli tyres were the undisputed winners of the first part of the Motocross World Championship. Having dominated the opening night race in Qatar and completed the double in the inaugural Thai di Pattaya round, the Scorpion MX also triumphed on the Dutch circuit of Valkenswaard prior to the next round on 14th April at Arco di Trento in Italy. After a two-week break, the Motocross World Championship resumed on 1st April with the first of the European rounds on the challenging Dutch track. Despite being made even more demanding by the icy surface produced by the sub-zero temperatures throughout the two race days, the track 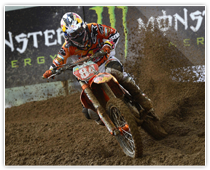 failed to slow down the march of Jeffrey Herlings who recorded his third double this year in MX2 on his KTM. On his home track, he followed the example of the other riders using Pirelli tyres and raced with the classic combination of a Scorpion MX MidSoft 32 front and Scorpion MX Soft 410 rear, which is unbeatable on sand tracks. Antonio Cairoli also leads in his class: indeed, the six-time world champion from Messina riding for the Red Bull Factory Team continues to lead the standings in the MX1 class.

Three victories for Pirelli in the early Motocross rounds
Newsroom