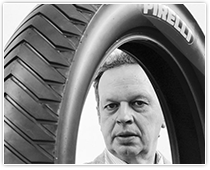 Tom Dixon, the renowned British designer, collaborated with Pirelli designing the collection “Pirelli by Tom Dixon”, a limited and exclusive edition of three scooter tyres on which the artist has committed himself to realize innovative and original tread patterns. These true masterpieces of rubber were visible to the public on the occasion of the Salone del Mobile Milano (Milan Design Week) as part of the artist’s exhibition entitled “MULTIPLEX, Yesterday, Today and Tomorrow” set up insidethe Galleria Manzoni. The collaboration between Pirelli and Tom Dixon was born almost by accident during a visit in the summer of last year of the British designer to Pirelli Headquarters in Milan. Dixon visited the Pirelli HangarBicocca, the non-profit foundation, established in 2004, which has converted a former industrial plant in Milan into an institution for producing and promoting contemporary art. He also visited the Pirelli Foundation, in which are stored historical archived documents on the history and activity of the company from its establishment in 1872 to the current day and the Research and Development Center in which the designer focused in particular to observe the processes carried out in the area where grooves on the tyres are cut by hand. During the visit, the artist was impressed and fascinated by the work seen on the tyres expressing his willingness to cooperate in some way working with Pirelli onto tyre rubber. 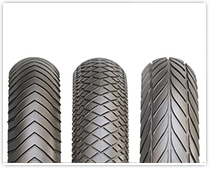 Considering the growing interest and attention from some motorcyclists regarding the tread pattern design of motorcycle and scooter tyres, which in some markets is becoming a key element in the choice of a tyre as much as the performance and quality offered by the tyre itself. Pirelli gave Tom Dixon free reign and the opportunity to give vent to his creativity in the customization of some scooter tyre tread pattern designs.