With 58 entries, representing 11 manufacturers, the first Blancpain endurance round at Monza graphically illustrated the popularity of the Blancpain GT Series, whose supercars are exclusively supplied by Pirelli. 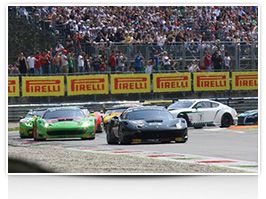 Top marques such as Ferrari, which eventually won the three-hour race with the private Rinaldi team crewed by Rinat Salikhov and Norbert Siedler, participate in this prestigious series, designed for race versions of some of the most desirable cars that Pirelli equips for the road. The mixture of close racing, drama, spectacle and pace regularly attracts healthy crowds, with a large turnout for Pirelli’s home race at Monza, known as the ‘temple of speed.’ With its mixture of long straights, high-speed corners and large kerbs, Monza provides a very tough test for Pirelli’s GT tyres, which have been revised this year to take into account the latest demands of sports car racing and offer even more reliability. Adding to the challenge on this occasion were high ambient temperatures close to 30 degrees centigrade, which presented a tough test for the drivers and cars. The GRT Grasser Lamborghini Huracan crew of Fabio Babini, Andrew Palmer and Joroen Mul showed their authority from the outset, making the best use of the DHC slicks to lead from the start, even though their advantage was only around 20 seconds for the majority of the race. They eventually won by 37 seconds, before being disqualified for a technical irregularity. However, there was no further penalty apart from exclusion. 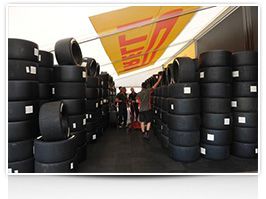 Pirelli senior engineer Matteo Braga commented: “It was a great weekend at Monza that really underlined the popularity of the Blancpain Endurance Series. Our GT tyres have undergone substantial revisions this year, mirroring the continual evolutions that are a hallmark of our Ultra High Performance products for the road. As a result, we saw a highly competitive and entertaining race, with exemplary performance from the tyres on one of the most demanding tracks of the year, which allowed the drivers to push to the limit. Congratulations to the winning Ferrari crew, but also the Lamborghini Huracan team, who made an extremely competitive debut with their new car.” The Blancpain GT Series includes both endurance and sprint rounds, with a title offered for each but competitors equally welcome to take part in both competitions for the overall championship. The next Blancpain round is the sprint race that takes place at legendary British circuit Brands Hatch from May 9-10. The GT series cars use 18-inch tyres, with the exception of Ferrari, which uses 19-inch tyres on the rear. These sizes are very close to those used for road cars, allowing a direct technology transfer from the track to the road.

For further information about Pirelli please contact Anthony Peacock on +44 7765 896 930 or anthony@mediaticaworld.com