Trento-Bondone hillclimb: A historic victory and record time for Faggioli with Pirelli

Simone Faggioli, driving a Norma M20 FC Zytek running on Pirelli tyres, claimed a historic eighth consecutive victory and a superlative new course record of 9m00.52s at the 67th Trento-Bondone hillclimb, which was a round of the European championship as well as the Italian championship. Pirelli’s success was completed by third place for Osella driver Diego de Gasperi and fourth place overall (as well as a first place in class) for Gloria driver Federico Liber. All of them used Pirelli P Zero soft tyres. • The race and the record: Simone Faggioli already set the fastest time in practice yesterday but improved further in the race today to dominate his rivals and break his own 2016 record of 9m07.55s on the well-known 17.63-kilometre Italian course. This was Faggioli’s eighth consecutive win on the event, eclipsing the previous benchmark of seven wins on the trot set by the legendary Mauro Nesti between 1975 and 1981. 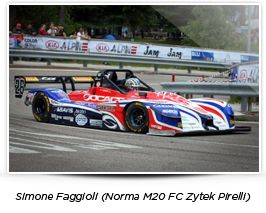 Quote Terenzio Testoni, Pirelli activity manager: “The 2017 Trento-Bondone hillclimb was a truly special event for Pirelli, with our P Zero tyres proving to be the winning choice in every size available, underlining their high technology content as well as the skills of the drivers using them. Obviously, we need to especially mention Simone Faggioli, who proved himself once more to be an extraordinary champion by pulling off a two-fold accomplishment: his eighth consecutive win and a new course record, which writes his name among the true greats of this complex discipline.”

Trento-Bondone hillclimb: A historic victory and record time for Faggioli with Pirelli