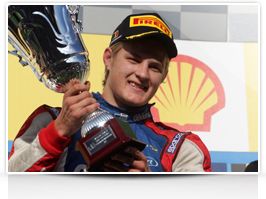 The Spa-Francorchamps circuit in Belgium has an awesome reputation, and complex conditions for both qualifying and racing in GP2 and GP3 underlined the extent of the challenge for the young drivers and their Pirelli tyres. Marcus Ericsson won Saturday’s GP2 feature race for iSport from fourth on the grid, having started on the P Zero Yellow soft tyres and then switched to the P Zero White medium rubber: a strategy adopted by the top six finishers. A different strategy was utilised by Trident Racing’s Julian Leal, who started from 17th on the grid: medium tyres at the beginning of the race and then used soft to the finish. This proved to be an inspired choice that helped him to seventh at the chequered flag. 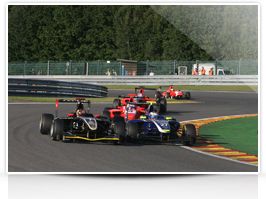 The complexion of the race was altered by an accident on lap eight that forced a re-start, with four drivers (Giedo van der Garde, Stephane Richelmi, Simon Trummer and Stefano Coletti) exercising their option to change tyres on the grid. However, this did not exempt them for the requirement to make a compulsory pit stop during the race. Ericsson had already made his stop from soft to medium tyres two laps before the re-start (along with the other podium finishers) so was able to take the lead definitively when the drivers in front of him pitted for their compulsory stops. The challenge in free practice and qualifying was completely different as Friday was characterised by torrential rain. Indonesian driver Rio Haryanto dominated the session to claim his first GP2 pole position, using Pirelli’s full wet tyres (there are no intermediates in GP2 and GP3: just slicks and wets). There was another first in the GP2 sprint race on Sunday, with Addax driver Josef Kral taking his debut win. Kral used the medium tyres throughout, which provided the strength, performance and durability to go a full race distance at Spa: the circuit that puts the most energy through the tyres all year. The same challenges awaited the GP3 drivers, who had the P Zero White medium tyre only available for Spa. Again, the drivers did not get the chance to run on them until qualifying on Saturday, following the washout of Friday. The feature race was halted after just four laps following an accident, with Lotus driver Daniel Abt winning from third place on the grid following an opportunistic move on the two leaders. The sprint race on Sunday morning, once more run from start to finish on the medium tyre, was less dramatic, with Finnish driver Matias Laine taking his first win after a great start. The highlight of the race was an inspired drive to second by Carlin driver Antonio Felix da Costa to move into the championship runner-up spot with one round remaining, 21.5 points behind series leader Mitch Evans, who failed to score. Pirelli’s racing manager Mario Isola commented: “This was one of the most challenging races that the GP2 and GP3 drivers faced all season, on account of the torrential rain during practice and qualifying, as well as the difficulty of the circuit – which accounts for the many incidents and accidents that characterised the weekend. A considered yet flexible tyre strategy and a calm head was essential, which helped Ericsson to a well-deserved victory in the feature race. Making the compulsory tyre stop before the red flag that interrupted the race turned out to be essential, although obviously nobody could have known that at the time, and it was interesting to see some drivers trying something different by changing tyres on the grid before the re-start. In the end, this idea didn’t quite pay off, but Leal tried a completely different strategy by starting on medium tyres and moving onto used softs for the majority of the race – which worked very well for him. Without a chance to run on the slick tyres before the races, it meant that the drivers had to assimilate the characteristics of the slicks in a very short space of time: the data and simulations calculated out by the team engineers also turned out to be an essential key to success under these circumstances. The GP3 race was equally thrilling, with our tyres performing very well in both races despite no previous dry running in Belgium, and as a result we are set for a thrilling conclusion to the championship next weekend.” Both the GP2 and GP3 Series resume alongside the Italian Grand Prix at Monza next week.