Triple victory for Pirelli in the first edition of the Monster Energy Supermotocross Riders’ Cup, KTM wins the Manufacturers Cup

Tim Gajser, Romain Febvre and Jeffrey Herlings win races with three different motorcycle brands in the spotlight of the Veltins Arena in Gelsenkirchen

There was great show for the first edition of the Monster Energy Supermotocross Riders' and Manufacturers Cup held in the Veltins Arena in Gelsenkirchen; the futuristic stadium normally hosting soccer matches of renowned club Schalke 04. The manufacturers had to compete in a unique race with the participation of the best European and American riders in three man teams for each brand. The fast and spectacular German circuit, formed from hard pack soil with a deep sand section, exalted the performance and versatility of the Pirelli SCORPION™ MX32™ Mid Soft, the tyres that allowed Pirelli’s riders to grab impressive results.

Jeffrey Herlings led Team KTM that took the overall victory. The MX2 world champion won Race 3 and was second in the MXGP class despite a crash in the second race start that forced him to a tough comeback. Tim Gajser was also strong. The MXGP World Champion won the opening race and finished second overall with Team Honda. Romain Febvre took victory in Race 2 but a bad start in the last outing forced him out of the fight for the overall win in MXGP class. Success for Pirelli also in MX2 which belong to Jeremy Seewer with the young Jorge Prado Garcia an excellent third. The ‘SMX Riders' and Manufacturers Cup’ ended a triumphant season for Pirelli in motocross. In the coming months, the teams and riders will prepare for the first race of the 2017 championship that will be hosted at the Losail circuit, Qatar, on February 25th. 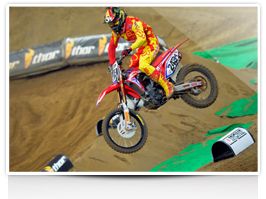