Under the floodlights at Losail Sylvain Guintoli is crowned eni FIM Superbike World Champion with the manufacturer title going to Aprilia; Pirelli successfully concludes the eleventh year as sole supp

After a head to head race down to the last turn the Frenchman got the better of the English rider who started off the weekend as the favourite with a 12 point advantage On the Losail International Circuit the eni FIM World Superbike Championship came to a close today, awarding the championship title of World Champion to Sylvain Guintoli and the Manufacturer Championship to Aprilia. 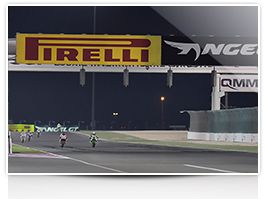 In Race 1 Tom Sykes (Kawasaki Racing Team) got off to a good start and took the lead straight away after starting from the third spot on the grid. Sylvain Guintoli (Aprilia Racing Team) overtook Ducati rider Chaz Davies and moved into fourth place. Behind Sykes, Jonathan Rea (Pata Honda World Superbike Team) and Loris Baz (Kawasaki Racing Team) brought up second and third. At the end of the first lap the Frenchman from the Akashi-based manufacturer overtook everyone and moved into the lead, followed by Rea and his team mate, Sykes, who had dropped into third position with the Aprilia Frenchman breathing down his neck. At the start of the fourth lap Guintoli began his comeback: first he overtook Sykes, moving into third place, and then in the eighth lap he also overtook Jonathan Rea, taking second place behind Loris Baz. In the twelfth lap Marco Melandri (Aprilia Racing Team) overtook Sykes, relegating him to fifth place. Toward the end of the same lap the Aprilia Frenchman, overtaking Baz on the finish stretch, took the lead to hold onto it until the end. In the fourteenth lap Tom Sykes grit his teeth and took fourth place back, overtaking Marco Melandri, and at the beginning of the fifteenth lap at the end of the starting stretch he managed to take third place and the bottom step of the podium, overtaking Jonathan Rea. At the end of the first race the Kawasaki standard bearer was still able to boast a 3 point advantage over the Frenchman from the Noale-based manufacturer. 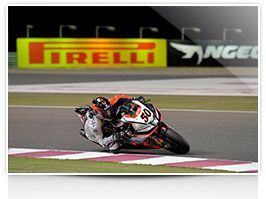 In Race 2 Tom Sykes once again started off very well and took the lead straight away. Behind him were Jonathan Rea, Davide Giugliano and Sylvain Guintoli. Not long afterwards Kawasaki's Englishman lost a position to Rea. In the meantime, during the second lap, Guintoli overtook Davide Giugliano, moving into third place behind his championship title rival, whom he successfully overtook at the end of the starting stretch the following lap. During the fourth lap the Aprilia Frenchman took the lead after a whirlwind move to overtake Jonathan Rea. At the end of the sixth lap Tom Sykes managed to pass Rea, hurling himself forward to chase down the Aprilia Frenchman. Tom Sykes gave it all he had, but in the fourteenth lap he was forced to give up a spot to Jonathan Rea, watching helplessly as any hope of a comeback went up in smoke. Going on to win the race, the French Aprilia rider clinched his 2014 eni FIM Superbike World Champion crown and contributed to the Manufacturer Championship win for the Noale-based company. In the FIM Supersport World Championship, Michael Vd Mark (Pata Honda World Supersport Team), already crowned World Champion at Jerez de la Frontera with two races still left to go, took his sixth victory of the season, also winning the award for Pirelli “BEST LAP WINNER: the fastest rider of the year in the Supersport class. Behind him in the race were Thai rider Ratthapark Wilairot (Core PTR Honda) and Frenchman Jules Cluzel (MV Agusta Reparto Corse), who also took second place in the championship. Begun in the 2004 season and now in its eleventh year, the technical partnership between Pirelli and the eni FIM World Superbike Championship teams and riders can now boast being the longest ever control tyre supplier in the history of international motorsports. Pirelli was able to achieve this result thanks to the constant efforts toward innovation and development of its products. This is a job achieved along with the riders in the factory derivative championship which has no rivals: just imagine that the Pirelli tyres in the racing range have put in a total of more than 1 million race kilometres, often running at extreme temperatures. Then, in 2013, staying true to the philosophy that has always characterised Pirelli's commitment and strategy in the FIM World Superbike Championship to use tyres which are not prototypes but standard and therefore available on the market, Pirelli, the first ever to do so, retired the 16.5 inch DIABLO™ Superbike tyres in favour of the new 17” tyres, a more commonly used size among bikers. The slogan “We sell what we race, We race what we sell” has by now become a trademark for the brand that demonstrates just how the experience and technology acquired in the racing world are made available to all bikers. This also explains the great effort which is put into development of the race tyres which focuses on performance and long life rather than just a flying lap. Thanks to the dedication of the World Superbike riders in testing the new 17 inch tyres, from 2014 Pirelli was able to use them, the first tyre manufacturer to do so, in the Endurance World Championship and also to make them available to the riders who race in national championships such as the British Superbike Championship, the Italian Speed Championship and the German IDM, just to name a few. The new 17 inch DIABLO™ Superbike tyre, from its début in 2013, immediately showed excellent performance and in 2014, with the new qualifying tyre, it contributed significantly to improving lap times, breaking many lap records on tracks where the championship has been held regularly in previous years. Important work was done not only on Superbike and slick tyres, but also on the DIABLO™ Supercorsa, a grooved tyre which is used in the Supersport, Superstock 1000 and 600 categories, as well as in the European Junior Cup. In this case as well, Pirelli engineers worked tirelessly, especially in terms of compounds which are now more versatile and higher performance. Comment from Giorgio Barbier, Pirelli Moto Racing Director: First of all I would like to congratulate Sylvain Guintoli and the Aprilia team for their success and for the job they did this year. Credit to Tom Sykes and Kawasaki as well because they battled with heads held high right down to the end, contributing to a show that held everyone's attention on the Championship. I would also be remiss if I did not congratulate David Salom for his consistency throughout the year in the EVO class. There were many unknown factors for Pirelli on this circuit but in the end the final result was positive. As early as Saturday Davide Giugliano improved on the track record set by Ben Spies in 2009 by two tenths of a second and then in the race the riders lapped decidedly faster than 5 years ago which demonstrates the progress we have made in recent years. The FIM World Superbike Championship has once again proven to be a championship which is fought for until the very end. Over the years Pirelli has always provided an active contribution to make the competition exciting, communicating with all the players involved, in other words the International Motorcycling Federation, the Championship organiser, the teams, the riders and the manufacturers. In more than a decade of participation as Official Tyre Supplier, the eni FIM World Superbike Championship has allowed us to develop products which are highly popular with the riders and bikers all over the world and which have dominated from the beginning as undisputed market leaders. For Pirelli 2014 has been, first and foremost, a year of great development, partly because of the introduction of the new EVO class. During the course of the year we doubled our efforts in terms of design, providing various tailor made solutions for the EVO category and the Superbike category with the goal of trying to level the playing field for the EVO Superbikes, giving faster riders in this class the chance to be competitive in the races and consequently the opportunity to make the Championship more balanced and more exciting. The information collected in 2014 relative to the EVO Superbike performance will be very important for us in view of the 2015 season when the grid for the premier class will be made up of only EVO Superbikes. This year was also the year which confirmed our current role as Exclusive Supplier for the Championship until 2018. We have four seasons ahead of us and we will continue to put forth our best efforts for the success of this championship and for the satisfaction of teams and riders.” The Pirelli solutions chosen by the riders: In Superbike, as always, DIABLO™ Superbike slicks were used. The solution preferred by most of the riders on the front was the S1699 SC1 development solution, whereas almost all the remaining riders opted for the SC2 standard tyre. On the rear two thirds of the riders on the grid chose the new development SC0 solution, the T0722, whereas the remainder chose the standard SC0.