GP2 Series leader Stoffel Vandoorne accomplished the rare achievement of winning a race in Monaco from fourth on the grid, using tyre strategy and rapid pit work from the ART Grand Prix crew to make up positions without passing a single car on track. 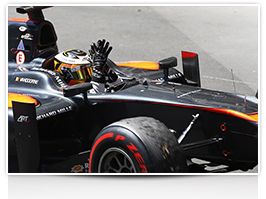 Racing Engineering’s Alexander Rossi started on pole after qualifying that was split into two sessions, due to the notorious traffic problems in Monaco. The sessions were held in wet conditions, which meant that the Cinturato wet weather tyre was used (with just one type of rain tyre nominated for GP2). The drivers in the opening session got the worst of the wet weather, with seven seconds separating the fastest time from the slowest over both groups. Rossi started on the P Zero Yellow soft tyres, but he was overtaken off the line by Trident’s Raffaele Marciello, who used the extra speed of the supersoft tyre to take the lead from second on the grid. As his tyres degraded he was caught up by Rossi and then Vandoorne. The same situation affected Arthur Pic (Campos Racing) who started from third on the grid with the supersoft. When Marciello pitted on lap nine, one lap after Pic, Rossi and Vandoorne were released into the lead in close formation – so it would come down to a battle between the Racing Engineering and Trident pit crews when their drivers stopped. In the end, Vandoorne’s crew was fractionally faster when they both pitted on lap 20 under a virtual safety car – which benefitted a number of competitors – and the Belgian emerged just ahead. From there, they both had to carefully manage the supersoft tyre for 20 laps to the finish. After a close battle, Vandoorne emerged on top to claim his third victory of the season. Julian Leal (Carlin) and Sergio Canamasas (MP Motorsport) adopted the same strategy as Vandoorne, gaining track position. While Leal finished third on the track, he received a 10-second unsafe release penalty that promoted Canamasas to the final podium. Vandoorne commented: “I had to fight for the win so it makes it even better. Me and Rossi started on the soft tyres. Marciello and Pic were on the supersoft, so we knew they were going to pit quite early. The risk was that there was going to be some traffic at some point. In the end, there was a safety car about 20 laps from the finish: it was just on the limit to box or not with the soft tyres. But it seems that it was the right decision to box then. We had to make the supersoft last until the end: I drove quite slowly in the beginning, making sure I didn’t kill the tyres. Then, I had some left in the end to push. The team did a great job putting the tyres on very quickly: I think the race today was won in the pitlane.” Status Grand Prix won the 30-lap sprint race held on Saturday afternoon courtesy of Richie Stanaway. With very low wear and degradation, the P Zero Yellow soft tyre lasted all the way to the finish with no problems. Stanaway started from second on the grid and made a better start than polesitter Marciello, enabling him to control the race from start to finish and claim a first GP2 win for Status Grand Prix. Vandoorne finished eighth to grow his championship lead over Rossi to 44 points. Stanaway commented: “After the first couple of laps, when I felt how good the car was, I knew that if I just stayed focused that was pretty much job done because I wasn’t struggling with any balance issues. And I could save the tyres. I could keep life in them whilst still going quick so once we got a couple laps into the race I knew I wasn’t really under pressure.” Pirelli’s racing manager Mario Isola concluded: “Monaco is one of the more straightforward ones in terms of tyre strategy because wear and degradation is low. The big question mark was how long the supersoft would last, and with just a short practice session and a rain-affected qualifying, the drivers didn’t have much information about this. As Vandoorne said, the feature race was effectively won in the pits, but the drivers still had to manage the supersoft for 20 laps to the end of the race. Their ability to do this is what won the race, and the remarkable fact that Vandoorne achieved it from fourth on the grid only underlines the importance of having the right tyre strategy in GP2.” The next round of the GP2 Series takes place in Austria from June 19-21, alongside Formula One and GP3.