Victory for Melandri astride Ducati in Race 2 of WorldSBK, for Sofuoglu on Kawasaki fourth consecutive win; Pirelli to analyse the tyres that had problems

The rider from Ravenna wins his first race of the season ahead of Reaand Sykes' Kawasakis, in WorldSSP 300 Mika Pérez takes the top step of thepodium on his Honda while in STK1000 the win goes to Marco Faccani astride his BMW

Italian Marco Melandri astride the team Aruba.it Racing – Ducati machine won Race 2 in the WorldSBK Championship today that was held at “Marco Simoncelli” Misano World Circuit. This is the Italian's first win after finishing on the podium six times this season. In the WorldSSP class, Turkish rider Kenan Sofuoglu (Kawasaki Racing Team) took his fourth win of the season and is now just a shout from the lead in the overall standings. Victory for Mika Pérez (WILSport Racedays) as well in WorldSSP 300 and for Marco Faccani (Althea BMW Racing Team)in the FIM Superstock1000 European Championship. Following the problem found by Jordi Torres with the rear tyre on his BMW in Race 2, Pirelli Moto Sports Activities Director Giorgio Barbier, stated: “Our goal is to complete the in depth analysis as quickly as possible in order to clarify the circumstances and causes of this occurrence. Our laboratories in Milan are already at work. Given the complexity of this analysis, a few days will be required to obtain results. In the meantime, until we have clarified and resolved the nature of the problem, we assure you that for the next FIM World Superbike Championship round scheduled to be held in Laguna Seca, we will use solutions that have already been used in the past with complete success.” In Race 2 Xavi Forés (BARNI Racing Team) started well from the second spot on the grid, followed by Jordi Torres (Althea BMW Racing Team) and Eugene Laverty (Milwaukee Aprilia) who, because of the new inverted grid, started from the front row. Shortly thereafter, Laverty was overtaken by Tom Sykes (Kawasaki Racing Team), winner of Race 1 and starting from the ninth spot on the grid for Race 2. In the meantime, the other Kawasaki rider, Jonathan Rea, moved into fourth place behind his teammate. On the sixth lap, Xavi Forés made a mistake and went long on a corner, thereby leaving an opening for Torres, Sykes and Marco Melandri (Aruba.it Racing – Ducati), the latter having moved up from tenth into third place. During the next lap, the rider from Ravenna managed to overtake first Sykes, moving in behind Torres, and then, in the tenth lap, he snatched the lead from Torres who, however, responded quickly to take it back. In the meantime, the lead group, in addition to the BMW and Ducati, was also made up of the Kawasaki machines ridden by Sykes and Rea. In the twelfth lap a crash put Alex Lowes (Pata Yamaha Official WorldSBK Team) out of the race. The turning point came in the thirteenth lap when Melandri overtook Torres to move into the race lead. Two laps later, on the hunt for a podium finish, Rea overtook his teammate for a provisional third place. Unfortunately, Torres' excellent race came to an end two laps early when he was force to retire due to a technical problem on his rear tyre. This left Marco Melandri to finish first ahead of Jonathan Rea and Tom Sykes' Kawasakis.

At 11:30 AM Italian time, the FIM Supersport World Championship took place with nineteen laps to race and Kenan Sofuoglu (Kawasaki Puccetti Racing) in pole position. Behind him on the grid were Frenchman Jules Cluzel (CIA Landford Insurance Honda) and Italian Federico Caricasulo (GRT Yamaha Official WorldSSP team). The starting positions also reflected the finishing order. The Turkish rider from the Akashi based manufacturer got off the line well, managing to hold onto the lead until the eleventh lap when the Honda riding Frenchman overtook him. A few laps later, Sofuoglu took back the position he had lost and held onto it until the finish, whereas Cluzel would have to settle for second place. On the bottom step of the podium, on the other hand, was the Italian Yamaha rider. This gives Kenan Sofuoglu his fourth win in a row, taking him to 100 Championship points and closing the gap to 5 points behind the leader in the overall standings, Lucas Mahias (GRT Yamaha Official WorldSSP team). Tyres selected on the grid of the WorldSSP race 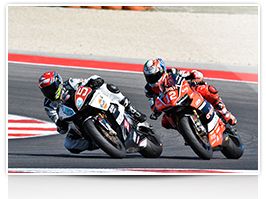 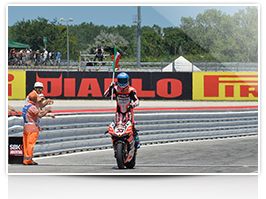 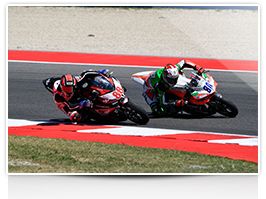 Victory for Melandri astride Ducati in Race 2 of WorldSBK, for Sofuoglu on Kawasaki fourth consecutive win; Pirelli to analyse the tyres that had problems
Newsroom