Walking on water during the Chinese GRAND PRIX 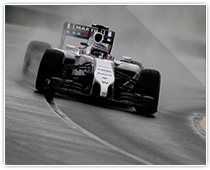 It was one of those moments that gave you goosebumps. During qualifying for the Chinese GRAND PRIX, last April, Williams driver Valtteri Bottas reached 316kph – that’s nearly 200mph – on the back straight of the Shanghai circuit: the longest on the FORMULA ONE calendar this year. He did this using the Cinturato™ Green intermediate tyre, in conditions so wet that visibility was minimal because of the spray coming from the surrounding cars. As usual, he was on wide FORMULA ONE tyres, which makes the avoidance of aquaplaning a real challenge, unlike road cars. And yet Bottas, at only the start of his second season in FORMULA ONE, achieved this feat using a Pirelli tyre that is not even meant for the very wettest conditions. With a tread depth of just 2.5mm, the intermediate tyre is capable of clearing 25 litres of water a second per tyre – in total 100 litres – at full speed: as Bottas found out. This allows optimal contact to be maintained between the tyre and the track. For full wet conditions, the Cinturato™ Blue is also available, which clears 65 litres of water per second per tyre. This technology is carried through to Pirelli’s road car tyres as well: the Cinturato™ P7 Blue tyre for the road, specifically targeting wet weather performance.  It was created using the lessons learned from the extreme wet weather performance of the Cinturato™ FORMULA ONE tyres. 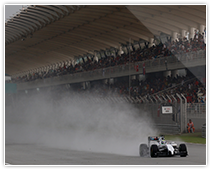 As a result, it has reduced wet braking distances by 9% compared to direct rivals and it is capable of clearing 15 litres of water a second per tyre. The Cinturato™ P7 Blue was also the very first tyre to be awarded an “AA” score by the new European tyre label, which grades all new tyres on performance.

Walking on water during the Chinese GRAND PRIX
Newsroom